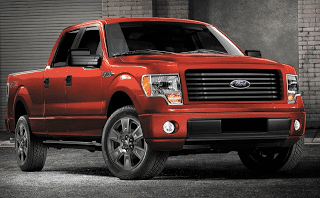 Although you’ve already seen these figures in the December edition of this post, this succinct 2013 best seller list shows the raw year end data for every truck in America.

The Ford F-Series was America’s top seller in 2013, and the top-selling vehicle overall. That’s no surprise.

It’s 18% growth rate was something to behold, however, and the fact that it was surpassed by the Ram P/U was even more impressive. Americans registered nearly 2.2 million pickup trucks in 2013. 88.7% of buyers opted for a full-size truck.

Historical monthly and yearly sales figures for any of these best-selling trucks can always be accessed through the dropdown menu at GCBC’s Sales Stats page, and for those not viewing the mobile version of this site, near the top right of this page, as well. GoodCarBadCar will soon publish the list of America’s best-selling SUVs and best-selling cars in 2013 and will also post December-specific editions.