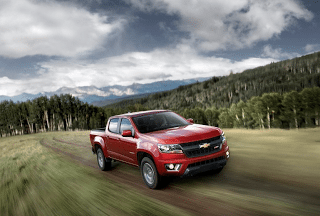 America’s pickup truck market grew by more than 21,000 units in November 2013, which just happened to be the month General Motors debuted its new Chevrolet Colorado. The Colorado’s main rivals will be, as they were before, the Toyota Tacoma – America’s fifth-best-selling truck, and the Nissan Frontier, the seventh-ranked truck.

Those two trucks, with help from a handful of leftover Colorado/Canyon sales and the Honda Ridgeline, stole just 11.4% of America’s truck market away from the behemoths in November 2013.

In the full-size category, the Ford F-Series generated 42% of the industry’s November sales. GM’s two core twins, the second-ranked Silverado and fourth-ranked Sierra, produced 31.4% of the full-size segment’s sales; the third-ranked Ram P/U another 19.1%. This left crumbs for the Toyota Tundra and Nissan Titan, which owned 6.4% and 0.8% of the full-size truck market, respectively.

In a rough year for the Titan, November was a particularly rough month for the bigger Nissan truck, as sales slid 33%. Every other continuing truck nameplate – Colorado and Canyon aside, reported increases, increases which averaged 19.4%.

Ford’s F-Series lineup recorded its seventh consecutive month above 60,000 units and its eighth month above 60K this year. Ford hasn’t sold more than 650,000 F-Series trucks in a single year since 2007, although 2013’s total will overshadow 2007’s 690,589-result by some measure, while also paling in comparison to the 939,511 F-Series sales Ford generated in 2004. With one month remaining, a month that typically sees a big surge in auto sales, Ford is on pace for 771,000 F-Series sales. Expect a more reasonable 755,000 F-Series sales – with a 66K December – and you won’t likely be disappointed.

You can click any model name in the table below to find historical monthly and yearly U.S. sales data. You can also select a make and model at GCBC’s Sales Stats page. This table is now sortable, so you can rank pickup trucks any which way you like. November best seller lists for SUVs and cars will be published shortly.