Through the first nine months of 2011, the Canadian auto market was 7.8 times smaller than the U.S. auto market. Nissan Maxima sales, however, are 26.4 times stronger in the United States.

Before that number shocks you more than it should, remember that Nissan sells 11.6 vehicles in the U.S. for every one vehicle Nissan sells in Canada, so the company’s market share south of the border is much healthier. But, as mathematicians would readily understand, 11.6 does not equal 26.4.

What’s the explanation? For starters, there’s one basic assumption auto observers can hold when it comes to Canadian choices which don’t jibe with the choices of American car buyers: a typical U.S. Altima buyer would be a Sentra buyer in Canada. The same goes for other automakers. Canadians pay more for cars and more for gas and therefore typically choose a smaller vehicle. The Maxima, being on the larger side, isn’t really the typical Canadian’s cup of automotive tea. As a result, not only is the Maxima rejected; so is the idea of buying a Nissan Maxima. 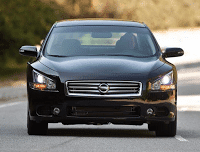 There’s much more to it than basic Canadian ideological car buying differences. Consider the Nissan Sentra, once again. In Canada, the Sentra’s base price is $15,478. U.S. buyers would see a base price of $16,060. Now there will inevitably be trim and equipment differences, but there’s no denying that Canadians can pay less for the car (before accounting for taxes and fees.)

Up one size class, however, the Altima’s base price is $3588 lower in the United States. And when we make it to the Maxima, Canadians are paying $6130 extra. That’s 19% more than an American would be forced to pay. Is it any wonder that Maxima sales in Canada are comparatively weak?

Is it any wonder that in America the Maxima is out-selling the Infiniti G family by 1210 sales through the first three quarters of 2009 (44,593 to 43,383) while in Canada Infiniti sells 1.6 G sedans and coupes for every Maxima sold? In America, where its base price is $3050 above the Nissan’s, the Mercedes-Benz C-Class is up on the Maxima by only 1535 sales. In Canada, where the Benz can be the less expensive car, Mercedes-Benz C-Class sales are four times stronger than Maxima sales this year.

Back on the main subject, just how weak are Canadian Maxima sales in comparison to what Nissan USA achieves? Nissan sold 6133 Maximas in America in September 2011. During the last eight years, Nissan Canada’s best Maxima annual sales tally was in 2004 when they sold 5209. And sales had fallen 56.5% from that high to last year’s year-end total.

Note: The Nissan Maxima is certainly not the only model with huge sales disparities between the U.S. and Canada. Significant market share differences usually exist in North America’s large vehicle segments or in premium segments. The Maxima is simply the car chosen to highlight the fact that Canadian and U.S. buyers are very different.