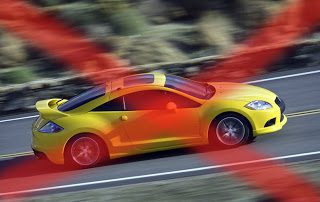 Production of the Mitsubishi Eclipse will end in August. Only the first two Eclipse generations had truly appealed to enthusiasts. The third-generation Eclipse maintained a measure of desirability. In the product planning stage for the fourth-gen Eclipse, Mitsubishi lost sight of what an Eclipse should be. The Eclipse isn’t pretty. It isn’t sporty in any meaningful way. It has muddied Mitsubishi’s message in a way only the Lancer Evo X can replicate.

And so, Mitsubishi is halting production of the Eclipse at its Normal, Illinois, plant while also killing off the tremendously unpopular Endeavor. Filling the void in Normal will be the Outlander Sport, initially a success for Mitsubishi.

Did Mitsubishi make a mistake in deciding to prematurely end the Eclipse’s life? Obviously you haven’t looked at the chart yet. Yearly volume for the Eclipse and Eclipse Spyder has fallen dramatically over the last decade. U.S. Eclipse sales dropped from over 72,000 in 2002 to just 4282 in 2010. 2010’s Eclipse volume represented a 36% decline from 2009. 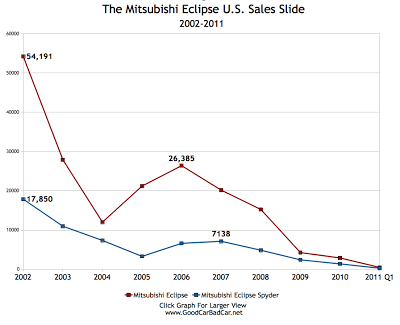