Mercedes-Benz R-Class Cancelled (In The U.S.)

The Alabama-built Mercedes-Benz R-Class will, for the time being, continue to be assembled in Alabama. Mercedes-Benz will not, however, be selling the R-Class in Alabama, nor will Mercedes-Benz sell R-Class wagons in any other part of the United States. There are surely a handful of R-Class variants on dealer lots across the U.S., so the rare R-Class fanboi can now be seen negotiating a rip-roaring good deal with a Mercedes sales manager somewhere.

The R-Class’s demise was as anticipated as the rising sun. From the beginning, it wasn’t a popular car. 2006, its second year on sale in the U.S., was its best. 18,168 were sold, or 7.3% of all Mercedes-Benzes sold in America that year. The very next year, sales fell 28.3% to 13,031 as the R-Class accounted for just 5.1% of all Benz sales. By 2011, when R-Class sales had fallen to 2385 units, its worst year on record, the tall wagon registered only 0.9% of all Mercedes-Benz USA sales. Click the chart below for a larger view in order to track historical R-Class sales. 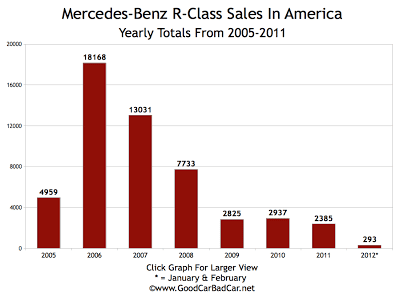 Mercedes-Benz USA sold 25,139 GL-Class SUVs in 2011 along with 24,310 GLK350s and 35,835 M-Class utility vehicles. Through 1/6th of 2012, GL-Class sales are up 6.5%, the GLK is up 3.7%, and a new generation of mid-range SUVs have seen M-Class sales shoot up 68.1%. Mercedes-Benz still sells a version of the E-Class should wagon lovers require a three-pointed star on their grille. That’s actually a surprising fact given the number of cool station wagons not available for sale in the United States. But the GL, GLK, and M are the real reasons Mercedes-Benz can afford to strip the R-Class from their lineup. They may also be the reasons Mercedes-Benz extinguishes the CLS Shooting Brake a few years after introducing that beastly beauty, too.