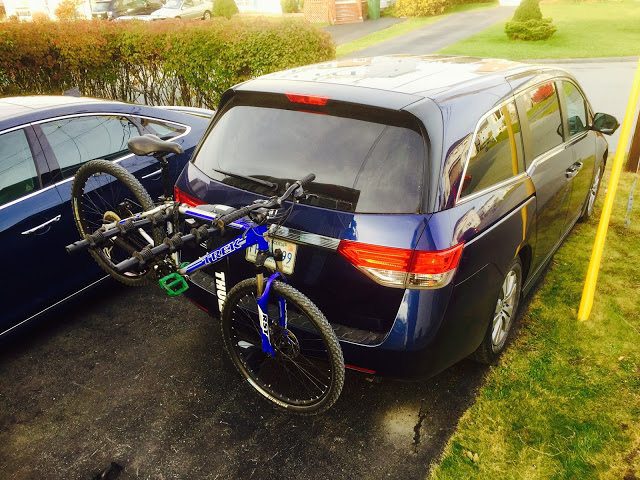 The bike rack is off.

Temperatures at or just above freezing and few uses over the last month caused us to remove our hitch-mounted Thule Apex from the rear end of our 2015 Honda Odyssey EX at the tail end of November.

The Apex is heavy, but not likely heavy enough to have a measurable impact on the fuel economy of our van. Winter tires and cooler temperatures haven’t had an impact, either, as the monthly mileage we witnessed in November was the best we’ve seen so far.

Much of our driving is spent in a suburban area of Halifax, Nova Scotia known as Eastern Passage. While we don’t get the Odyssey out onto the highway often, our “city” mileage will likely be better than yours because there’s very little stop-and-go. Steady cruising at 65 kmh in an urban setting simply is not the same as urban driving full of four-way stops and traffic lights. In essence, every one of our Odyssey’s journeys begin and end with a seven-kilometre low-speed cruise.

The Odyssey’s fuel economy isn’t yet measurably hindered by the fitment of winter tires, but the handling and steering accuracy is let down somewhat. That hint of Accord-like sharpness that’s missing in the steering of every Odyssey competitor is now missing in the Odyssey. Ride quality remains mostly pleasant, but road noise is amplified.

The van’s cargo volume was once again put to the test when, with the third row folded and a two-seat bike trailer already inside, we loaded an assembled kiddie picnic table inside, as well. This kind of flexibility isn’t matched by three-row crossovers.

It’s one thing to be able to plan ahead for large cargo loads; it’s another to be confronted by an opportunity the sister-in-law found for a free table and decide, despite the fact that the cargo area is already holding plenty, to take the table anyway.

Speaking of flexibility, we spent two full weeks with full-size trucks in November which caused us to drive our own Odyssey less than we otherwise would have. While the Ram 1500 EcoDiesel we drove was the smaller Quad Cab variant, not the Crew Cab, the Ford F-150 Platinum EcoBoost was a full-fledged SuperCrew. Kids love SuperCrew legroom.

Are full-size pickup trucks viable minivan alternatives? Undoubtedly, particularly for certain families, particularly when one of those trucks consumes fuel like a minivan, if not less. The 2015 Ram 1500 EcoDiesel with which we spent a week consumed just 9.9 L/100km, 25% less fuel than the 2015 Ford F-150 EcoBoost we drove the following week.