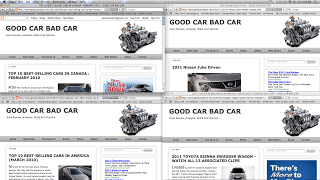 GoodCarBadCar.net’s Most Popular Posts Of 2010

There are a few hours left, but considering the nature of this post, cold, hard statistics aren’t vital for an understanding of popularity within GoodCarBadCar.net. Rather than share with you a simple list of the most trafficked pages within this domain, it might be more interesting to see the most popular posts from different subsections. Without further ado, here are the most actively read posts from GoodCarBadCar.net from the last twelve months.

Most Popular U.S. Auto Sales/Best Sellers Post:
Top 10 Best-Selling Cars In America – March 2010 Edition
March, like February in Canada, was a month in whiuch GoodCarBadCar.net was still building its reputation for being the home for auto sales data breakdowns. Then came three-fourths of the year in which March’s version could continue to build traffic. The Toyota Camry had a huge lead in March, by the way.

Most Popular Good 12 Post:
Part XI – Toyota Venza
This is last year’s edition, of course. 2011’s The Good 12 was only just released. But the 2011 Toyota Venza is repeating.

Most Popular Sales Stats Segment:
Small Cars
Now a combination of the subcompact car segment and the compacts and a handful of niche models, the Small Car category includes stalwarts like the Honda Civic, Toyota Corolla, and Mazda 3. The Small SUV segment is nearly as popular.

Most Popular Driven Review:
Nissan Juke
The 2011 Nissan Juke SV AWD was tested in early November and eventually became a member of 2011’s The Good 12 v4.0.

Most Searched Car:
Scion iQ
With official fuel economy numbers from Natural Resources Canada and predicted pricing from The Good Car Guy, no car (outside of Sales Stats) received as much attention from GoodCarBadCar.net’s audience than the still-upcoming Scion iQ.

Most Popular Video(s):
13 Toyota Sienna Swagger Wagon Clips
If you haven’t seen them already, check’em out. If you have seen them, you need to take another look.