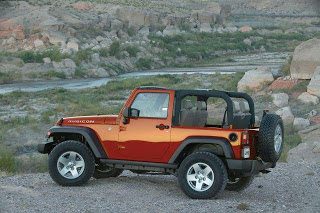 Anything else would be…. too civilized. Only recently has the Jeep Wrangler become the fulfillment of ‘U’ in ‘SUV’. It’s enlargement ensured that. Wranglers are most definitely not ‘sporty’ in the way a Porsche Boxster is sporty. And yet the Jeep Wrangler is perceived as the purest and thus the most uncivilized SUV in The Good 12 Supersize. 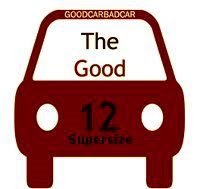 This is the case because of the age of its concept, due to its hardcore nature, as a result of Jeep sticking to that concept and nurturing the Wrangler’s nature. They who snicker at Wrangler owners number in the thousands. They are those who switched from wagons to SUVs in the late 90s, switched from SUVs to so-called crossovers this decade because they are more car-like, and want more economical 5000-lb CUVs now. Suffering from the effects of a short wheelbase (stiff ride) and amazing off-road capability (er… on-road capability), Wrangler owners manage to enjoy automotive life for other reasons. Strangely, some of those reasons for enjoyment are downright car-like. Terrific visibility and easy parking are just two such examples.
Let it be clear that The Good Car Guy & GoodCarBadCar.net do not honour the Jeep Wrangler out of guilt for society’s newly-discovered hatred of genuine SUVs. No, the Jeep does everything it is supposed to do very, very well. Like the smart fortwo in The Good 12 v2.0, Jeep’s Wrangler isn’t right for everyone. But for whom the Wrangler tolls….
—–
Engines: 202 horsepower and 237 lb-ft of torque from a 3.8L V6
City Mileage: 15 miles per gallon
Base USD Price: $21,210
Cargo Capacity: 56.5 cubic feet behind front row
Towing Capability: 2,000 pounds