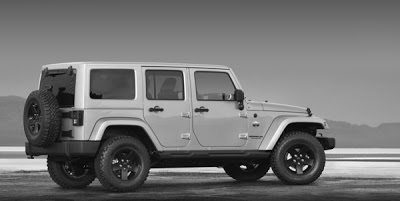 If the 2012 Jeep Wrangler was a hopeless on-road device, would we care that it could go anywhere at anytime? No. After all, the vast majority of time you’ll spend in your new vehicle won’t be traversing red dirt roads in coastal Prince Edward Island after a winter of storms that demolished all semblance of roadness. More likely, your vehicle’s main chore is taking you to work.

Fortunately, the Wrangler is comfortable enough for menial tasks. Visibility, even in the Wrangler Unlimited, is sublime. The Wrangler’s corners are clearly marked, making the process of squeezing through traffic as easy as it would be in a vehicle that didn’t have electronic sway bar disconnect, 10.2 inches of ground clearance (Wrangler Rubicon), or approach and departure angles of 44.6 and 40.6 degrees (Wrangler Sahara).

Wranglers are popping up in the driveways of former midsize sedan owners and luxury SUV buyers everywhere. Sure, that’s because Jeep finally installed a properly powerful V6. But it’s also because the Wrangler’s interior is no longer where you send the kids after they’ve committed heinous acts on the family hamster.

It’s nice in here. Things even feel nice. And if you want more things, you can have’em, although a basic Wrangler Sport is basic indeed. Crank them there windows. Reeeeach to unlock the passenger door.

The Jeep Wrangler still isn’t for everyone. Hopefully it never will be. Yet it’s an increasingly common choice for mainstream car buyers. Thankfully, as of 2012, the Jeep’s squared-off styling and prodigious capabilities mean no one can accuse the Wrangler of being anything less than interesting, even if it’s overwhelming success has made it ubiquitous.

It’s Not Perfect: Positioning the Wrangler on the highway isn’t challenging. Maintaining that position, however, is another thing altogether. And though the Wrangler may be one of the least-expensive convertibles on sale today, managing its two tops isn’t equivalent to pushing a button in an SL-Class Benz. And the short-wheelbase two-door Wrangler? Don’t expect to carry much cargo when the rear seat is filled with humanity.

Sales Stats: Wrangler sales are better than ever in no small part because of the impact the four-door Unlimited has had on popularizing the Wrangler ethos. The jeepiest of Jeeps is routinely one of the 10 best-selling SUVs, both in Canada and the United States. Monthly and yearly sales figures for the Jeep Wrangler can be viewed here.