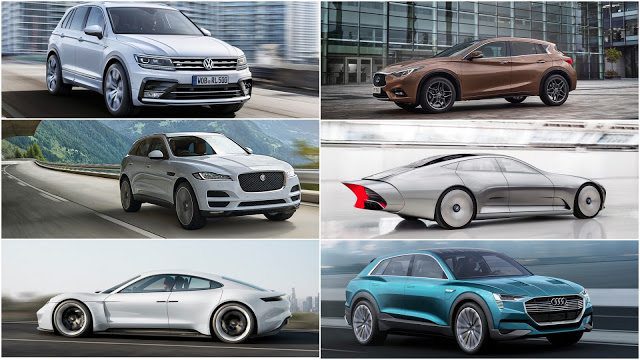 FAR-OFF FUTURE
The Mercedes-Benz Concept IAA is not your next E-Class. But Mercedes-Benz frequently integrates styling cues from their wildest concepts into subsequent production cars. The IAA, which stands for Intelligent Aerodynamic Automobile, was introduced at German’s Frankfurt auto show yesterday.

DISTANT FUTURE
Porsche’s Mission E Concept appears to be a far more likely production car than the IAA. Porsche talked up technology that could charge the all-electric Mission E in 15 minutes. Aside from that, we’ve quickly arrived in an era where a 600-horsepower electric four-seater doesn’t seem absurd at all. The Mission E was revealed to auto journalists yesterday at the Frankfurt auto show in, you guessed it, Frankfurt.

FUTURE
We’re only weeks away from the first deliveries of the Tesla Model X, the Californian automaker’s first utility vehicle. While the Volkswagen Group’s Porsche division showed what the Germans could do in opposition to the Model S, the Audi e-tron quattro Concept was VAG’s answer to the upcoming Model X.

medianet_width=’468′; medianet_height= ’60’; medianet_crid=’481536334′; THE HERE AND NOW
Although we’re told that Infiniti will be introducing a higher-riding crossover version of the Q30 called the QX30, the Q30 itself is surprisingly elevated. The wheelarches aren’t filled, Infiniti’s press release promotes the Q30’s higher hip point, and the whole thing feels like a midway point between the Mercedes-Benz A-Class and the Mercedes-Benz GLA-Class. Why do we bring up Benz? The Q30 is largely identical to the Mercedes-Benz GLA we reviewed earlier this summer.

MONEY
Jaguar’s pricing for the F-Pace keeps the company in the conversation among value-oriented premium vehicles. After revealing price cuts and consumer friendly equipment changes earlier in the month, Jaguar now tells us that the F-Pace will start from USD $40,990.

TTAC
Porsche’s U.S. sales figures are now higher in number than Scion’s. Of course Scion and Porsche aren’t direct competitors, not by any means. But the fact that Porsche is now a higher-volume brand speaks volumes about Scion’s downfall, and causes us to wonder if there’s any hope of returning to old form.

JALOPNIK
Americans have registered slightly more than 140,000 new wagons through the first eight months of 2015. As passenger car sales decline, the most SUV-like cars are on the rise.

RECALL
Fiat Chrysler Automobiles is recalling 23,629 copies of the Dodge Dart (model years 2013-2015) because they, “may experience failure of the transmission control module (TCM), causing the transmission to unexpectedly shift into neutral.”

FCA is also recalling 149,512 Ram HD trucks (model year 2014 2500-series and model year 2013-2014 3500-series trucks) because, “The affected vehicles may have inadequate welds securing the front track bar frame brackets, which may result in the bracket components separating from the frame.”

WATCH
While Roger Federer was losing, sadly, on Sunday night, he was still used as the spokesperson for Mercedes-Benz. Meanwhile, Novak Djokovic continued to wear his Peugeot shirt. Rafael Nadal is a Kia ambassador.