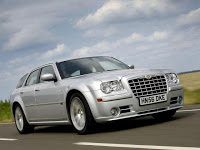 Simon Elliott, the boss at Chrysler’s UK branch, wants something better. Since returning to the UK after a couple years managing Chrysler’s operations in China, Elliott has seen the dreadful numbers. Chrysler sales dropped 21% in the UK last year and Jeep sales dropped 9% over the same period. Though Dodge sales jumped dramatically, Elliott predicts an absence of growth from the Ram-badged brand this year. Yikes.

So, says, the boss, “We currently have 21 models across three brands and I would like to see that dramatically reduced over the next 12 months.” Ya think? Chrysler brass is talking about this (and acting on it) on our side of the pond as well.
Chrysler UK has 83 dealers, too. If that sounds like too much to you, Elliott disagrees. He just wants dealers to carry the cars that’ll sell well in their region, rather than filling their lots with every single model. Sounds so revolutionary.  Wow. Dealer profitability is quite low or nonexistent. As some give up and, as Simon Elliott says, “lose their appetite for us”, Chrysler wants to recruit new enterprises to keep the number up around 83.
It might help Chrysler if some of the cars for sale were appealing to Europeans.