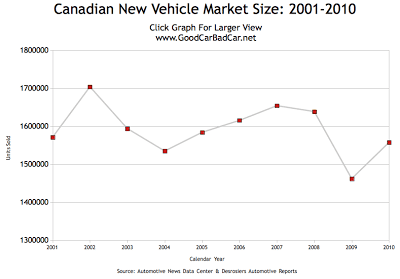 Compared with their American counterparts, Canadians prefer their cars slightly smaller, mainly because cars in Canada are slightly more expensive but also because fuel costs in Canada are slightly more expensive. Other than that, there are very few differences from one market to the other: basically exaggerated tendencies toward smaller cars as fuel prices rise and a greater likelihood of buying cheaper automobiles when the global economy struggles to grow.

It may surprise you to learn that pickup truck sales are incredibly strong in Canada. Among passenger cars, yes, Canadians will without fail buy more compacts than midsize. But “light trucks”, a category which includes minivans, SUVs, and many crossovers, formed a huge portion of the Canadian new vehicle market in 2010. Approximately one out of every sixteen new vehicles sold in Canada in 2010 was a Ford F-Series truck. Reflecting the percentage of light truck sales in the Graph below is the blue line, a line which accelerated rapidly in 2009 and 2010 in unison with the upward climb of incentives on trucks and SUVs. 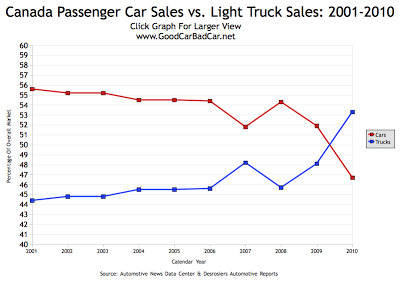