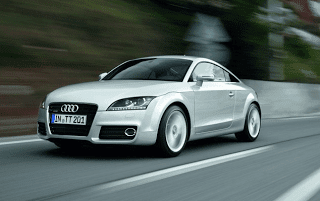 Audi TT Sales – The Decreasing Popularity Of A Beautiful Car

One of The Good Car Guy’s favourite cars, no matter the on-road dynamics or reliability, will always be the Audi TT. To be honest, initial pictures of the Audi TT didn’t impress. Who could tell the front from the back? Then a TT was spotted in person and bam!, the Audi TT was deemed to be one of the most beautiful cars in the world. Ever. It isn’t just the exterior – TT interiors have been top-notch from day one.

The TT is no longer number one in the hearts of sports car enthusiasts, however. Whether it’s the superior dynamics of the Audi’s rivals (TTs drive better now than ever, by the way) or the fact that car design maybe isn’t timeless after all, the Audi TT is an ultra-niche, ultra-low-volume player in 2010, and not in an “exclusive-so-it’s-kind-of-cool” way. Why don’t people still want this beauty? Just check out the Graph below for proof.

For the record, Mercedes-Benz SLK sales are down 23.8% through the first 11 months of 2010. Sales of the Porsche Boxster/Cayman duo are down 7.9%. The BMW Z4, the most recent small German sporty car to have undergone a style change, is up 15.5%. All are out-selling the Audi TT. 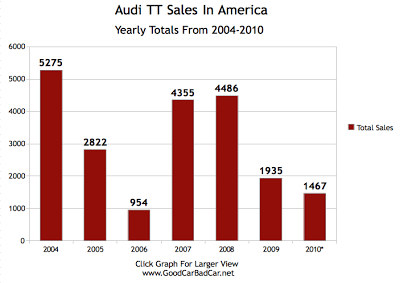