“No way, bloke. The 911 might be German and expensive; but it can be raced in a pinch and is a true sports car”, says the Londoner as he walks out of the rural Northamptonshire pub and gets into his used Porsche Boxster. The conversation inside continues. “Ach, he’s crazy. The 911’s bloated. I want something tidy, something with character, like the modern equivalent to an old Triumph.” A youngster then pipes up: “What about the MX-5, no?Good reliability and pretty small, ya must admit.” Immediately shot down by the group’s elder, an automotive know-it-all adds his two cents. “There’s nothing – I say nothing – like the feel provided by the enigmatic but capable Jaguar E-Type. I’m a lover of the new XKR but yearn for natural aspiration, none of this supercharged stuff.” Finally, the party’s outsider, the fellow who lived in Boston while in uni, suggests the impossible: “There really isn’t anything wrong with those American sports cars, ya know. I drove a Mustang once. They called it a Shelby something’er’other. A stonkin’ fast ride around the block it’ll give you.”

He’s greeted with silence. American sports cars? Yes, though the anecdote is fictional, the portrayal of the global view of GM, Ford, and Chrysler’s sporting cars is spot-on, I do believe. Yet the Detroit Three build a quintet of crazy cars; cars unlike anything you’ll find in British or German factories. Call them pony cars, muscle cars, fast cars or sports cars if you like – the Chevrolet Corvette and Camaro, Ford Mustang and Dodge’s Viper and Challenger are crazy wicked veehickles and Americans buy ’em with joy in their souls.
Of course, sales are lower these days. Recession ’09 has sent the two more expensive models (Corvette and Viper) into a sales tailspin. Days of 1,000,000 Mustangs sold in 18 months are over. Settle for tens of thousands and you’ll be okay. In Graph form below, check out the Sales Stats of these five cars in September and year-to-date (though the Camaro hasn’t been on sale all year). You might be surprised. 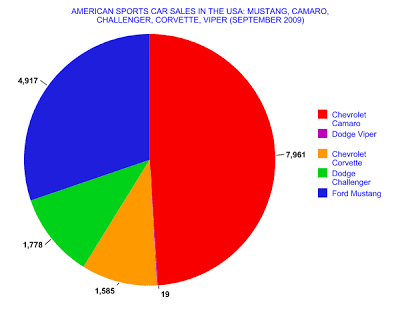 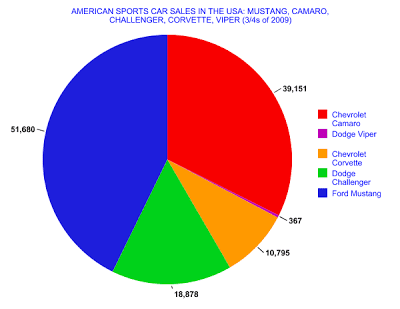