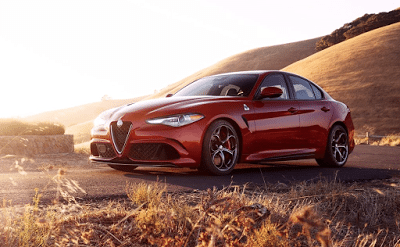 Here you will find monthly and yearly Canadian and U.S. sales figures for the Alfa Romeo Giulia. The Giulia is Alfa Romeo’s all-new premium compact sedan that competes against the Mercedes-Benz C-Class, BMW 3 Series, Audi A4 and Cadillac ATS. It was premiered in June 2015, with market launch in January 2016. This is Alfa Romeo’s first car in this segment since the production of the 159 ended in 2011. The Giulia is also the first saloon by Alfa Romeo in over two decades to use a longitudinal engined rear-wheel drive platform, since the 75 was discontinued in 1992. The Giulia came out of the gates with a bang, coming second in the Car of the Year 2017 competition, with the hot-rod QV beating the amazing C63 AMG and M3 sedans in all head to head reviews by the best journos in the automotive space. Italian flair adds a unique touch of sport to the sport sedan segment, this is Alfa Romeo’s chance to finally drive great sales volumes in North America.

The first Giulia models on sale were the 2.2 L Multijet II turbodiesel and the 2.9 L V6 Quadrifoglio. A 2.0 L MultiAir2 turbo petrol engine was announced at the time of the Giulia Quadrifoglio making its North American debut at the Los Angeles Auto Show in November 2015. The first US deliveries of the Giulia took place in September 2016.

While several trims will be offered our favorite is the top-spec Quadrifoglio sport sedan. The Alfa Romeo Giulia Quadrifoglio is powered by a twin-turbo 2.9-liter V-6 making 505 hp and 443 lb-ft of torque that sends power to the rear wheels via an eight-speed automatic transmission. The real volume will come from the two “base” models, the Giulia and Giulia TI trims in USA, some versions are available with Alfa’s Q4 all-wheel-drive system and with new eight-speed automatic transmission with available column-mounted paddle shifters. The first US deliveries of the Giulia took place in September 2016.

While early, initial sales volumes seem strong, quickly getting to about 1,000 units per month in the United States. We will watch volumes over the next six to twelve months and see whether we can confidently say that Alfa is truly back.

Don’t forget to check out the Fiat Chrysler Automobiles Sales Reports and the Alfa Romeo brand compared with all other brands in the monthly Auto Sales By Brand post. 2016 monthly totals, following FCA’s decision to issue more accurate auto sales data at the end of July, do not mesh with the year-to-date totals FCA is reporting, as expected.