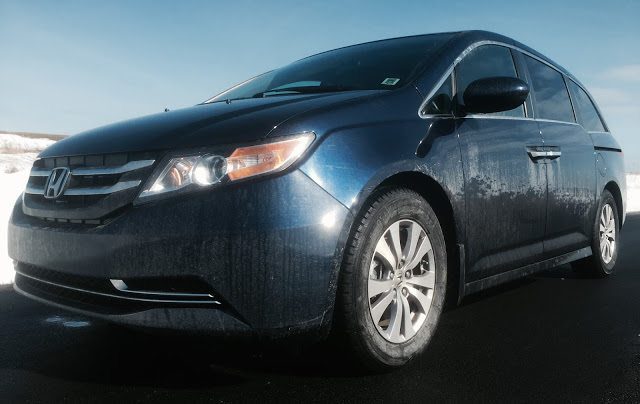 It took nearly eight months, but we finally got there. Heading up Nova Scotia Highway 111 between its terminus and the exit for Russell Lake, the odometer in our long-term 2015 Honda Odyssey EX rolled from 9999 kilometres to 10,000.

The timing was not safe for a picture. We pulled over a few kilometres later.

We are not major mile munchers. The provisions laid out by automobile manufacturers – new vehicles are sent to GCBC Towers every week – cuts our Odyssey’s mileage nearly in half. Over the last month, we’ve put approximately 800 kilometres on a 2016 Mercedes-Benz GLC300 4Matic, a 2016 Fiat 500X Trekking AWD, a 2016 Honda HR-V EX-L AWD, and a 2016 Honda Civic 1.5T Touring.

Thus, over the likely four-year duration of this long-term minivan test, we’ll be stretching it to roll past the 60,000-kilometre mark.

37,000 miles. Enough time to see how a van holds up to family life, right? There’ve surely been no problems yet.

Exceptional fuel economy continues to be the order of the day. The 3.5L V6 is coming ito its own, happier to rev and more punchy in the mid-range than it was a couple months ago. Attempting to fit child seats in the Honda HR-V clarified just how easy installation is in the Odyssey.

We wouldn’t change our desire to have Honda’s floor trays included with the vehicle, but it’s worth noting that they’re not quickly removed for cleaning at the local Rubber Duck car wash.

It’s by no means a difficult process, but the front tray wraps around the driver’s seat, centre console, and front passenger seat in such a way that removing it when dirty will require you to vacuum your seats.

The second row tray, meanwhile, requires seat flipping, no difficult process but not something your going to do when a two-year-old is asleep at the car wash. Thus, we haven’t hosed down our floor mats this winter and likely won’t until the worst of winter is over. They’re nasty.

But like the small size of the sunglasses holder, our Odyssey complaints are minor in nature and few in number. Eight months since acquisition, there’s not a hint of buyer’s remorse.