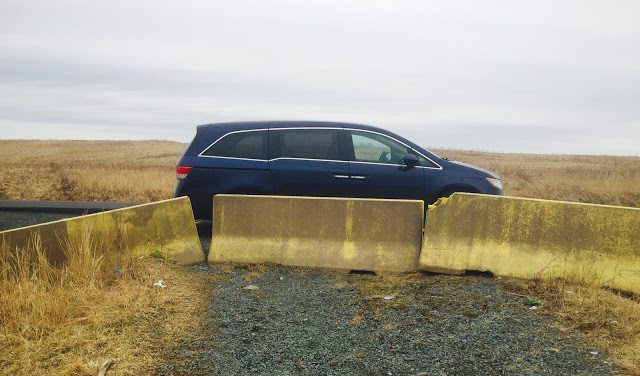 Through no fault of its own, our own 2015 Honda Odyssey EX was back on a hoist in a Honda dealership in April, about a month after having its first service completed at Centennial Honda in Summerside, Prince Edward Island.

A slow leak in the Odyssey’s left-rear Michelin Primacy developed just after the all-season tires were reinstalled. (Winter wasn’t quite over, however.) The slow leak developed into a fast leak when Mrs. Cain was out with a two-year-old on a grocery run. With the tire shop where the Odyssey’s Michelins were reinstalled unwilling to squeeze the van in to take a look and Portland Street Honda just down the street from Sobeys and the Irving where more air was pumped into the tire, the Odyssey was fixed up quickly at the Honda store.

The culprit? Not poor installation or bad TPMS sensors. It was a nail.

Had we and the Honda store both had more time, we should have had them look at the squeaks that have developed in the sliding doors. Squeak may not be the right word – it’s more of a high-pitched groan heard when entering a driveway or driving through a rough parking lot at low speed. (The noise may be common at higher speeds, too, but we don’t hear it.)

From what we can tell on the forums, this is a common complaint in Odysseys even with lower mileage. It’s also easily remedied in most cases. We’ll have it looked at soon.

We haven’t completed enough mileage to see how our fully broken-in 2015 Odyssey will perform in terms of fuel efficiency on all-season tires. We only had the Odyssey in our possession for a few months when the winter tires were installed.

But with the all-seasons back on our Honda, it’s once again clear that the Odyssey stands head and shoulders above its minivan rivals in terms of handling and steering precision. Ride quality remains superior in the Toyota Sienna, and presumably in Chrysler’s new Pacifica, but the Odyssey, freed from its winter tires, reminds me why I’ve always felt our van was more of an Accord+ than a Grand Caravan alternative.

Since our last update, the Odyssey’s odometer added only 890 kilometres. The Hyundai Elantra, Toyota Highlander Hybrid, Ford F-150, and Volvo XC90 we’ve been testing, for varying reasons, accrued the bulk of our mileage.