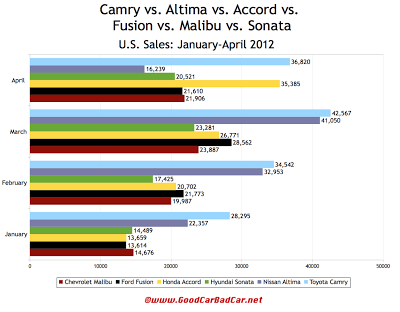 U.S. 2012 Sales & Specs: Toyota Camry vs. Nissan Altima vs. Honda Accord vs. Ford Fusion vs. Chevrolet Malibu vs. Hyundai Sonata

But if we exclude the crossoverish Subaru Outback, Honda Crosstour, and Toyota Venza as well as exclusively hybrid and/or electric cars like the Prius and the higher-end Volkswagen Passat CC, these six cars own three-quarters of the midsize market. For the most part, it’s all accomplished with traditional four-door sedan bodies. Only the Altima and Accord are offered as coupes. 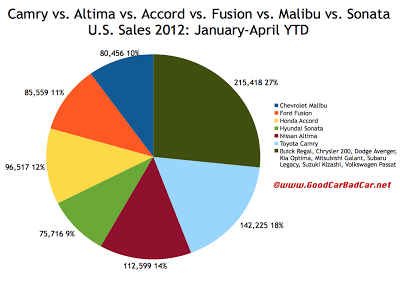 To accompany these midsize car sales charts, we’ve done something a little different by listing the key specifications of the current base midsize cars produced by General Motors, Ford, Honda, Hyundai, Nissan, and Toyota. The best-selling Camry isn’t the cheapest, most powerful, most efficient, or most capacious, and it isn’t the featherweight of the group. However, it ranks near the top in most categories.

Among the six most popular midsize sedans in the United States, the 2012 Toyota Camry L has the third-lowest base price, the third best city and highway mileage, the third-biggest interior, and the third best power-to-weight ratio. It’s also one of the two lightest. No faithful tracker of the U.S. midsize car segment would be surprised to find that the Camry is statistically average even as it dominates the 14-car segment with 18% market share. 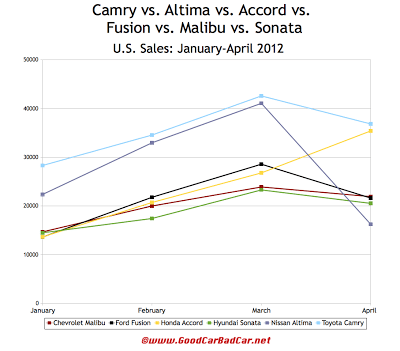 There’s a lot to look at in this post. After the jump you’ll find key specifications for the six leading midsize cars. You can click any one of the three charts for a larger view. Use the dropdown menu at the top right of this page to find historical monthly and yearly sales figures for these cars and every other vehicle currently on sale in North America. At the end of this post you’ll also see pertinent links directing you to best seller lists and previous midsize car sales posts. GoodCarBadCar’s April 2012 U.S. auto sales breakdown has 18 other posts worth checking out, this being the 19th and most recent.

Source: Manufacturers & Cars.com
Prices include delivery/destination and an automatic transmission, torque is listed in lb-ft, range is theoretical based on EPA highway rating x fuel capacity, trunk and interior volume is measured in cubic feet, curb weight is listed in pounds, power-to-weight equals pounds per horsepower. The Camry, Sonata, Fusion, and Malibu use a 6-speed automatic, the Accord a 5-speed, and the Altima a CVT. No incentives are taken into account as these vary by region and change frequently. A non-S Altima 2.5 should cost $1000 less but isn’t yet shown on Nissan USA’s site. The regular non-Eco Malibu will have a 100 cubic-foot interior and a 16.3 cubic-foot trunk and will cost less than the Eco. Altima mileage numbers (and thus, range) haven’t been confirmed by the EPA yet. An all-new Fusion will be available soon.