2010 DODGE RAM HEAVY DUTY WEIGHS AS MUCH AS…

Fuel economy wonks and Car & Driver subscribers know better than to go searching FuelEconomy.gov for the EPA ratings of very heavy vehicles. One such unsearchable vehicle would be the 2010 Dodge Ram 2500 Laramie Mega Cab 4×4. Now Dodge…. or Ram, whichever happens to be the title of the day over at Fiat-run Chrysler, goes out of its way to share provisional estimated Environmental Protection Agency mpg figures with the public even though the Ram 2500’s GVWR (gross vehicle weight rating, the maximum allowable weight of the vehicle when loaded) is above 8,500 pounds. See, the EPA’s mandate doesn’t include testing (or forcing manufacturers to test) heavy-duty vehicles.

Ford and General Motors aren’t about to share fuel economy estimates on the heavy-duty versions of the Ford F-Series, Chevrolet Silverado, and GMC Sierra, at least not on their websites. Not that Dodge is owed any applause for equipping a gigantic truck with an enormous inline-six diesel and finding out that said vehicle will travel 14 miles on a gallon of gasoline in “mostly urban driving”.

In truth, any paragraph in this article consumed by talk of fuel economy is off subject anyhow. No, you ought to take another hard look at the potentially planet-shattering curb weight of a 2010 Dodge Ram. Hitting the scales at 4,519 pounds, the 2010 Dodge Ram 1500 is a comparitively gentle beast. That’s a basic regular cab with a shortish box and no options. I mean, a Maserati GranTurismo Convertible weighs 4,600 pounds. 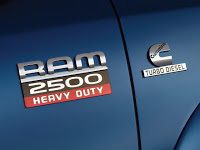