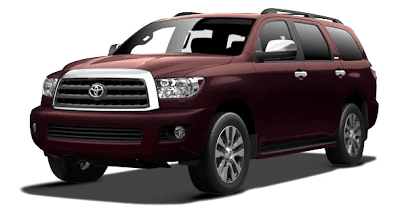 Among smaller SUVs and crossovers competing for attention in the United States, no continuing vehicle suffered as great a decline as the Kia Sportage in 2012. Hyundai Santa Fe sales slid 4.5%, but Santa Fe sales have been rising of late. Kia Sorento sales slid 8.2% the year after it reached an all-time high in U.S. sales volume. The Mitsubishi Outlander was down 21%, but that’s Mitsubishi, and we basically assume that sales will fall. The Honda Element, Suzuki Grand Vitara, Mazda CX-7, Mazda Tribute, and Suzuki Grand Vitara are dead, dying, or gone.

The Sportage is certainly hindered by the Sorento’s price proximity, but the bigger story is that the overall Kia brand’s continued ascension occurs without the support of crossovers in a market where small crossovers are very, very popular. Keep in mind, this isn’t a commentary on the popularity of the Sportage or the Sorento – Kia sold nearly 120,000 copies of the latter in 2012. But the decline of these two products, in addition to the extinguished Borrego, didn’t hold Kia back from recording a 15% year-over-year increase in U.S. sales in 2012. In other words, Kia’s car business is rockin’, up 36% in 2012, 51% in 2011, 4% in 2010, and 18% in 2009. And even when the new vehicle market was in tatters, Kia car sales rose 0.2% in 2008.

This is an SUV sales segment breakdown post, however. Returning to the subject, the Honda CR-V had a tremendous year, selling more often in 2012 than in any other year in its history. The CR-V was the best-selling SUV or crossover in the United States in 2012, outselling the Ford Escape by 20,644 units.

Scanning the lists of larger and/or more expensive midsize and large SUVs reveals a far greater amount of red ink, the kind of colouration that signifies declining year-over-year sales. From obvious candidates like the Subaru Tribeca and Mitsubishi Endeavor to popular vehicles like the Buick Enclave, Chevrolet Traverse, and GMC Acadia, many big crossovers struggled to find as many buyers in 2012 as they did in 2011. The same can’t be said of the best sellers, however. Sales of the Ford Explorer rose 21%, as did sales of Jeep’s Grand Cherokee. The Nissan Pathfinder, Toyota Highlander, and Volkswagen Touareg all posted increases better than that which was achieved by the overall new vehicle market.

Very little went right with the biggest mainstream brand sport-utility vehicles, though. One vehicle, the least popular Toyota Sequoia, recorded a slim 1% improvement in sales, equal to 129 extra units for Toyota over the course of 2012’s twelve months. Six other full-size SUVs were a drag on the overall market’s growth. The Chevrolet Tahoe, America’s 21st-best-selling SUV, sucked away 11,623 sales from General Motors that it had provided the brand last year; the GMC Yukon another 6432.

As always, you can find historical monthly and yearly sales figures for any of these models by selecting a make and model at GCBC’s Sales Stats home or just clicking their name in the tables below. The biggest change from last month’s edition of this post is that the tables visible after the jump are now sortable. Click any heading to see SUVs listed by December volume, or year-over-year change, or whatever you like. Click the heading again to flip the order, and click the headings at the far left to return to the original order. 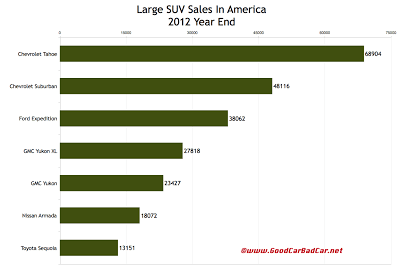