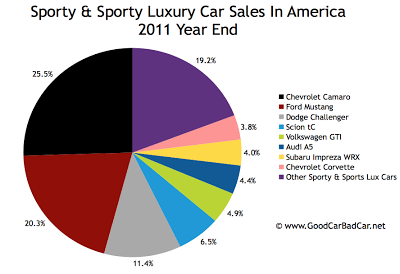 The S2000, long since cancelled by Honda, found two buyers in the United States in December 2011. Odd, but true. In total, Honda sold five S2000s in 2011. This is fairly irrelevant information, so let’s move on to 2011’s bigger, more important sports car news.

2011’s German roadster contest was won by the BMW Z4. Not far behind was the Mercedes-Benz SLK. Combined, Porsche’s Boxster and Cayman found 3150 U.S. buyers. The Audi TT surged at the end of the year but wasn’t a candidate for German roadster sales leadership.

The best-selling American muscle car in America was the Chevrolet Camaro. The Camaro beat the Ford Mustang by an astonishing 17,811 sales in 2011. The Mustang range is better than ever, but sales slid 4.4% last year.

There’s one other car, besides the S2000, appearing in this month’s first sporty car sales table that doesn’t normally show up. Subaru USA broke down the Impreza’s total sales, providing us with a chance to see how the WRX measures up. There are no Mitsubishi Lancer Evolution numbers with which to compare the WRX’s (if you know where Evo sales figures can be found, do share), but the WRX did end 2011 with more sales than the… Chevrolet Corvette. Although the WRX reported a terrific year-over-year improvement, the Subaru still couldn’t compete with the Volkswagen Golf GTI in terms of outright volume.

Keep scrolling for a look at the sales results of higher-priced sporting automobiles in the United States. Use the dropdown menu in the top right of this page to find specific monthly and yearly sales figures for any model currently on sale in North America. 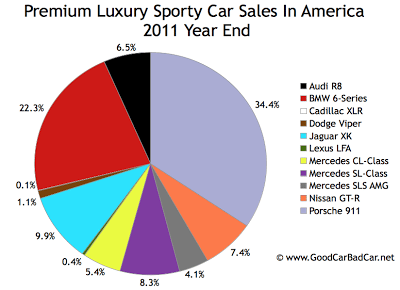 Sales of Audi’s R8 have never been higher. And December 2011 was a notable month for the R8, as Audi’s Lamborghini-derived supercar had its best month of the year, and its second-best month ever, after November 2008. The R8 did not prove to be a Porsche 911-beater, not even in this, its best year.

Because of the BMW 6-Series’s gigantic year-over-year boost, the R8 didn’t come close to matching the 6er’s total, either. BMW’s 723 6-Series sales in December helped it to a 911-crushing experience, but year-to-date figures show the 911 to be America’s favourite premium sports cars. And the new 911 will be an even better car. Audi would need a much-less expensive R8 model to compete with Porsche’s basic Carrera and the 911’s incredible sales totals.

December was the best month yet for the Lexus LFA. You’ll also notice the Cadillac XLR in the table. It’s there just to show its 12 2011 sales – no XLRs were sold in December. Nissan’s GT-R beat the Audi R8 by 149 sales in 2011. The Mercedes-Benz SLS AMG was an increasingly popular proposition; the Mercedes-Benz SL and CL less so. And Dodge Viper sales shot up to 36 in December. Dodge must be finding leftover Vipers in the same lot Honda’s finding S2000s.