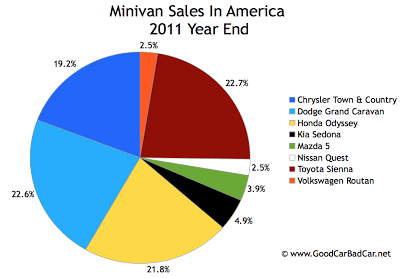 The best-selling minivan(s) in America in 2011 were the Chrysler Town & Country and Dodge Grand Caravan. Only they weren’t.

So what’s this about the Sienna not being the best-selling minivan in America? Think about it: separating the Town & Country from the Grand Caravan is like separating the scoring achievements of Henrik and Daniel Sedin. One does not produce without the other. Together, Chrysler’s two vans found 205,182 buyers in 2011. One might ask if Chrysler would have sold that many minivans if the two vans became a single van. In fact, Fiat boss Sergio Marchionne asked just that, and the response is becoming a policy – there’ll only be one brand selling vans for the company in the near future.

Officially, yes, the Toyota Sienna was the best-selling minivan in 2011, and rightly so. It’s GoodCarBadCar.net’s favourite offering, aside from the too-small-for-most-buyers Mazda 5. But more accurately, the Drysler Grand & Town was America’s favourite minivan in 2011.

Keep scrolling past the jump for a detailed look at the pickup truck segment’s U.S. sales results in 2011. You can read more about the final pickup truck standings in this post from earlier in January. Monthly and yearly sales figures for every model currently on sale in North America can be found by accessing the dropdown menu at the top right of this page. Make use of that, it’s a killer new feature. 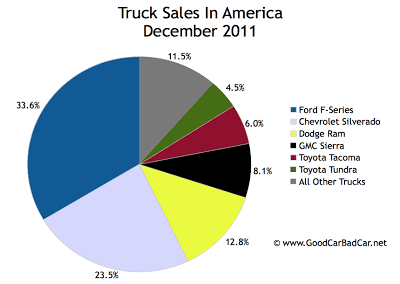 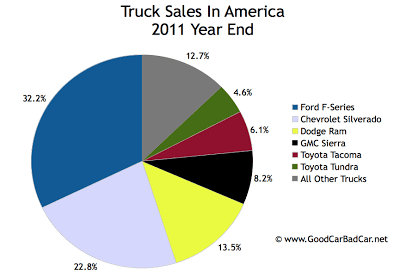