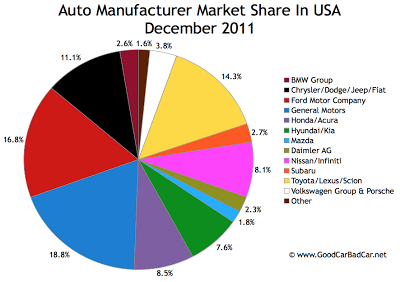 Home
Top Level Reports
Brand Marketshare
General Motors ended 2011 having conquered 19.6% of the market, approximately one out of every five new vehicle sales in America. Ford trailed with 16.8% market share, Toyota was back at 12.9%, and the Chrysler Groupended 2011 at 10.7%. Detailed sales figures for these companies and their individual brands can be viewed here.

For General Motors, 19.6% marked a slight improvement from 2010’s 19.1%. Ford was up narrowly from 16.7% last year. Toyota fell sharply from 2011’s 15.2%, a decline of more than two percentage points. The Chrysler Group climbed more than a full percentage point.

Elsewhere, changes were mostly minimal though in certain cases quite meaningful. Honda’s decline from 10.6% to 9% is notable. Hyundai/Kia greatly increased their share of the U.S. market from 7.7% to 8.9%. Mazda, Mercedes-Benz, BMW, and Subaru were mostly level. Nissan USA grew its share of the U.S. new vehicle market from 7.8% to 8.2%. The Volkswagen Group was also up just under a half percentage point to 3.7%.

The first chart you see below clarifies the December 2011 situation, details of which can be viewed here. Keep scrolling and click to expand for the 2011 year end edition of America’s auto manufacturer market share chart. Specific sales figures for individual models can be seen in recent best seller lists and by accessing the dropdown menu at the top right of this page. 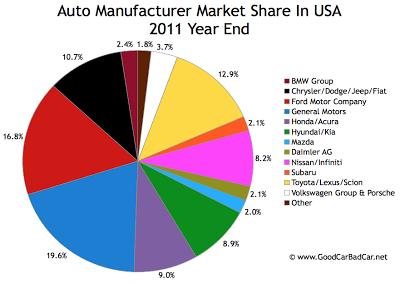