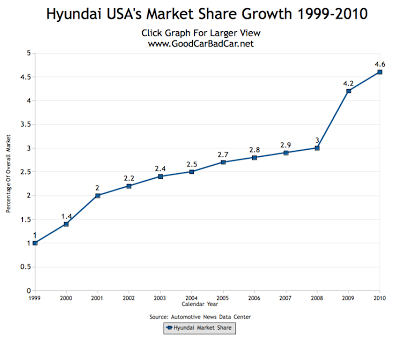 You already know Korea’s autombile manufacturing industry is stronger than ever. You heard that the 2011 Hyundai Sonata was one of America’s best-selling cars in 2010. You recently read about the Hyundai Genesis becoming America’s 17th most-popular luxury car. A simple windshield survey will tell you the 2011 Kia Sorento is a hit – and GoodCarBadCar.net confirms it. And as a prelude to 2011, December 2010 had the all-new and very handsome 2011 Hyundai Elantra as one of America’s ten top-selling cars.

Then yesterday GoodCarBadCar.net’s audience scanned a couple Graphs displaying Hyundai’s ability to grow their sales in the United States even when the market shrinks. And this market share pie chart from January 5th said plenty about Korea’s strong standing in the U.S. marketplace, right? Well, yeah, it was pretty clear. But the chart below, yes that’s the one, says more about Hyundai’s growth in America than any chart GoodCarBadCar.net has ever displayed.

Starting in 1999 when Hyundai sold one out of every hundred new cars registered in America, to 2001 when Hyundai doubled its market share in just two years, to 2009 when the company’s market share more than doubled, Hyundai is now parked at 4.6% of the overall U.S. automobile market. Parked? That’s probably far too strong a word. Based on trends over the last twelve years, if Hyundai doesn’t increase its U.S. market share, that’d be a colossal disappointment, particularly given the advent of a new Elantra, the terrific 2012 Hyundai Accent Autoguide.com covered yesterday, and the sporty 2012 Hyundai Veloster revealed in Detroit.

While we’re on the subject of U.S. auto-selling market share, there are nine other significant swings from 2010, as contrasted with the company’s 2009 numbers, posted below the Hyundai chart.