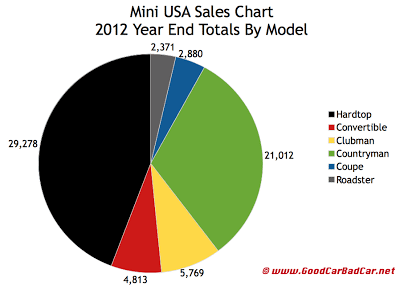 I remember listening to a conversation in which a youthful Porsche 911 fan was told by a Porsche aficionado that he, the youthful fan, should stop liking the 911 Targa. “It doesn’t fit with the 911 ethos,” the Porsche snob said. On paper, the aficionado was right – the Targa is a bit of a poseur’s Porsche. You can have a 911 that’s better drive if you purchase a basic 911 Carrera. But I’ve come to believe that what’s written down in physics textbooks isn’t always right in the automotive world. 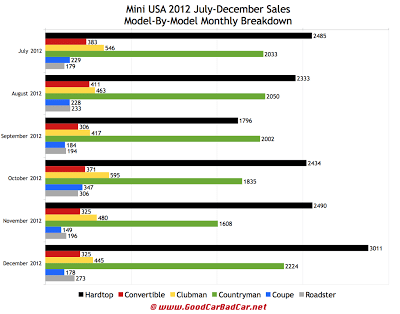 How does this relate to Mini? As an auto enthusiast and a Mini fan, I feel that I’m not supposed to like the upcoming Mini Paceman. But seeing one on the road for the first time on New Year’s Eve, I do like it. A lot. And it makes the Countryman seem unnecessary and more than a little gauche. True, the JCW Paceman in the above image is a also bit over the top.

We’ll be seeing Mini Paceman sales in this chart soon, but don’t be surprised if it doesn’t become a major player. After all, we’re not supposed to like these maxi Minis.

Click either chart above for a larger view. Don’t forget you can find sales figures for the Fiat 500, smart fortwo, Volkswagen Beetle, and any other competitor by selecting a make and model at GCBC’s Sales Stats home.