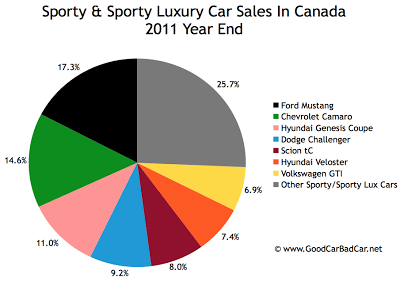 The cars showcased in this article formed just 1.7% of the Canadian new vehicle market in 2011. Collectively, they’re about as popular as Canada’s 13th-best-selling vehicle, the Volkswagen Jetta.

So why aren’t you noticing all these Hyundai Velosters on Canadian roads? The answer to that question is fairly basic. The Veloster is only popular in comparison to other brand new cars. A vehicle like, say, the Volkswagen GTI, has had years to build up a population, so they’re still easily outnumbering Velosters on Canadian roads. But there’s a second, more import response: there just aren’t that many Velosters being sold. These charts make you think there are, the fact that the Veloster’s December total is way higher than anything in this chart makes you think there are, but this is a chart which displays niche vehicles. Of which the Veloster is a startlingly successful example.

Ford Mustang sales slid 15% in 2011 but it was still the most popular sports/sporty/sporting/muscle car in Canada. Chevrolet Camaro sales fell 9%; the Dodge Challenger was down 24%, so the Mustang was in good company. The Hyundai Genesis Coupe was down 10% in 2011 but December was its best December yet as sales jumped 42%. The Scion tC forged a market for itself, one which might be hard to keep a hold on when the Scion FR-S comes to town, pulling tC buyers upmarket and yanking what few buyers remain for the Nissan 370Z. The Z, by the way, was one of Canada’s worst-selling cars in 2011, along with the Honda CR-Z, Mazda MX-5 Miata, Volkswagen Eos, Porsche Cayman, Nissan GT-R, and Mercedes-Benz SLS AMG.

High-end sports car sales figures for December and 2011 as a whole can be seen after the jump with the accompanying market share pie charts. Sales info on all these models and every other model on sale today can be accessed through the dropdown menu at the top right of this page. 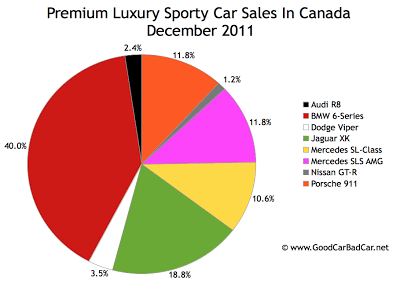 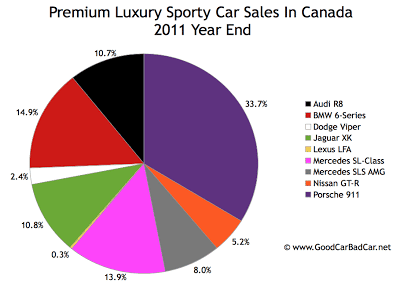