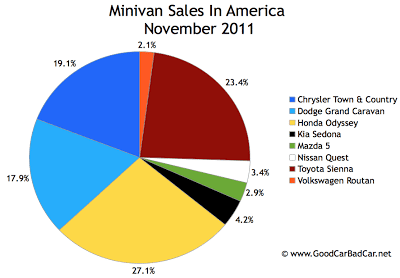 The battle to become America’s best-selling minivan in 2011 could go one of three ways. The Dodge Grand Caravan, currently ranked second in the year-to-date standings, needs to out-sell the top-ranked Toyota Sienna by 883 sales in December to take the crown. The less likely possibility has November’s most popular minivan, the Honda Odyssey, out-selling the Sienna by 4286 sales in December in order to end the year as America’s favourite.

What’s missing from this speculation is the fact that the Dodge Grand Caravan’s January-through-November volume forms just 54% of Chrysler’s true minivan total. When combined with the nearly identical Town & Country, Chrysler and Dodge have sold 183,684 minivans through the first eleven months of 2011, nearly 84,000 more than Toyota achieved with the Sienna.

Last month’s version of this post can be viewed here. Keep scrolling for a look at November sales figures of every pickup truck on sale in the United States. Monthly and yearly sales data for all these vehicles and every other current model can be found by accessing the dropdown in the top right of this page. 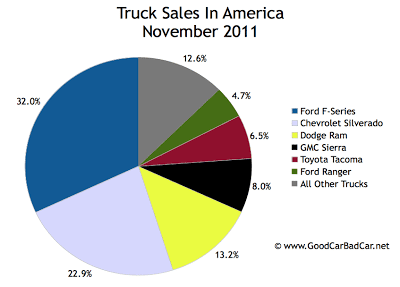 Of the 16 trucks currently on sale in the United States, only five reported a year-over-year decline in sales last month. The most expensive of the bunch, Cadillac’s Avalanche-based Escalade EXT, was down less than 1% in November 2011. The defunct Dodge Dakota slid 46%. GMC’s Canyon, the oft-forgotten twin of Chevrolet’s Colorado, slid 23%. Honda Ridgeline sales fell 4% in November and are off 45% this year. Sales of the Toyota Tundra dropped 15%.