The Good Car Guy is nothing like the frequently read BMW 3-Series boosters from mainstream publications. Sure, the BMW 3-Series is in The Good 12 v3.0, the highest honour for a car at GoodCarBadCar.net. Yes, the BMW M3 and BMW 2002 can be found in GoodCarBadCar.net’s 100 Favourite Cars list. And about twice a month, in posts like this, the BMW 3-Series is exalted for its Marketplace domination while its competitors are… well, teased.
One would safely assume that hundreds, if not thousands of the 12,610 residents of Canada who purchased or leased a BMW 3-Series in 2009 did so for the wrong reasons. I’ll admit that readily. They purchased or leased a BMW 3-Series because it’s a symbol of attaining goals; of arriving. These people might not even understand the concept of sublime rear-wheel drive dynamics, or even that the BMW 3-Series is a rear-wheel drive car.
Regardless, 12,610 3-Series variations were sold in Canada last year, way more than any of its competitors. Way more than any other luxury car. Way more than the vast majority of mainstream cars, too. No two other cars in the Graph below can be combined to topple the 3-Series. If you were somehow able to merge Mercedes-Benz and Audi, then buy out Saab in order to put the C-Class, A4, and 9-3 on the same platform; their sales still wouldn’t reach the levels of the BMW 3-Series.
The BMW’s competition isn’t far from reaching its levels of dynamic prowess. But they still seem quite a ways off from attaining its sales success. Check out the equivalent U.S. Graph here. 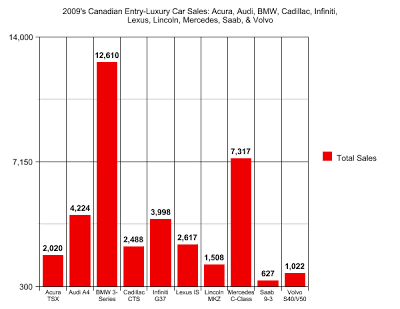