Add up all the luxury vehicles sold in July by Lexus, Mercedes-Benz, BMW, Lincoln, Cadillac, Audi, Infiniti, Porsche, Saab, Hummer, Volvo, and Acura. Your total? Same as mine – 95,492. Obviously, this doesn’t count sales of Jaguars and Land Rovers (because Tata doesn’t like to share numbers) or the mega-expensive Ferraris and Bentleys. But all those automakers sell in lowly totals.

95,492 is an interesting total. See, that’s fewer vehicles than Toyota managed to sell in July. In fact, 95,492 sales is less a total smaller than that achieved by Ford, Chevrolet, or Honda. The point? Cash For Clunkers (CARS.gov) no doubt helped the mainstream manufacturers at the end of the month more than it could the premium brands. Cars priced at $45,000 or above weren’t included in the program. More importantly, the coverage you you see both here at GoodCarBadCar.net and in the mainstream automotive press skews heavily toward the outrageously expensive machinery. In reality, the twelve luxury brands mentioned above were outsold by the top twelve mainstream brands by 711,597 vehicles in July. That’s without the 20,590 vehicles sold by Volkswagen, or the 16,549 of Chrysler’s, the 5,968 Saturns sold, or the 19,032 Mazdas sold. Take a look at the Graph below to get a grasp of how big the big guns really are. 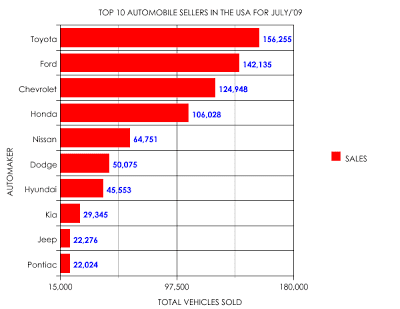