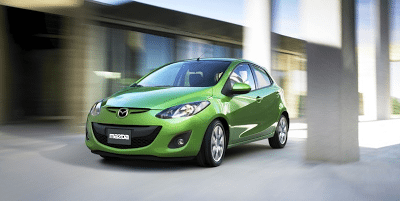 The Elantra and Civic were trailed by three of their direct competitors from Toyota, Mazda, and Chevrolet. If Toyota Canada counted Corolla sales as the U.S. Toyota division does, by including the Matrix, the Corolla would rank number one in February 2012 sales. Behind those three compacts you’ll find the leading subcompact, Hyundai’s awfully roomy Accent. The Toyota Camry was Canada’s best-selling midsize sedan in February, 424 units ahead of the Hyundai Sonata. Camry sales are up 211% through the first two months of 2012.

The most surprising car in the Top 20 is no longer the Subaru Impreza. February was the Impreza’s third consecutive month in this group. No, February’s shocker was the Mazda 2. Indeed, the Mazda 3 was twice as popular as the 2 and thus still the larger factor in Mazda Canada’s success. But sales of the Mazda 2 nearly doubled to 1108. February Mazda 2 sales improved 197% compared with the month prior.

You will find the top 20 best-selling cars in Canada in the table below. There’ll be more best seller lists to follow: SUVs, trucks, overall vehicles, and premium vehicles. You can always find monthly and yearly sales data for your favourite nameplates by accessing the dropdown menu at the top right of this page.