17,410 pickup trucks were sold in Canada in January 2011. Put another way, pickup truck sales were responsible for 21.3% of the overall new vehicle market last month; the Ford F-Series alone represented 66 out of every 1000 new vehicle sales in January.

Notice the Cadillac Escalade EXT’s presence in the Graph below? The EXT is also folded into the Escalade’s total sales in the large luxury SUV chart. Together, the Escalade EXT, Honda Ridgeline, and the $42,480 2011 Chevrolet Avalanche’s market share was just 2.1% in January, down from an also-low 2.4% in 2010.

As far as minivans go, market share is the name of the game. Most minivans have none. The Dodge Grand Caravan, on the other hand, grabbed hold of 65% of the minivan market in January; 5.2% of the overall new passenger vehicle market. Throw in the $28,575 2011 Volkswagen Routan and the Chrysler Town & Country – they’re all built at the same plant in Windsor, Ontario – and the platform’s minivan market share climbs to 68.2%. A little more than three out of every ten minivans sold in Canada in January 2011 weren’t some sort of fifth-generation Chrysler van. 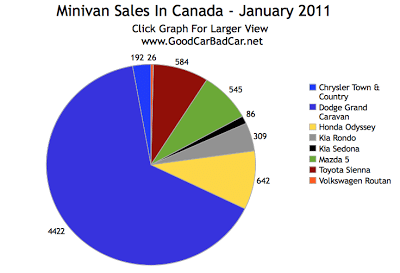 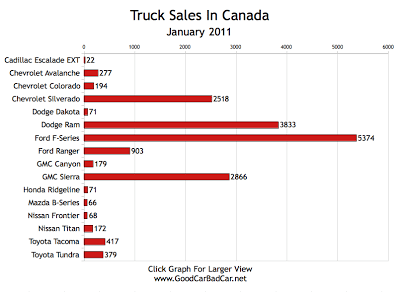