There will be times in your life, young one, when the most bucolic setting is full of loneliness. One of those times could be when owning a vehicle from the Graph below. This is Sales Stats in Jerry Seinfeld’s Bizarro World: cars, the ones nobody want.

In fairness, one car is here because it runs on hydrogen and isn’t widely available. At all. Another makes an appearance in the birthing phase of its life. I haven’t even seen it yet. Numerous others appear on the list of Worst-Selling Cars In America circa March 2010 because they’ve been replaced or are about to be. Or should be. And a couple cars…. well, we love’em, but the market segment in which they compete is tiny.

For the record, premium automobiles weren’t considered as candidates. They’re supposed to be exclusive. Also, SUVs, vans, and trucks were left off, at least for the time being. We’ll see what the cat brings in come April. 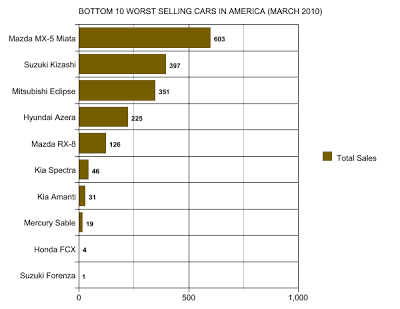