When The Good Car Guy first began contemplating the insertion of a Worst Sellers Graph into the exhaustive monthly rundown of Sales Stats info available on GoodCarBadCar.net, it quickly became obvious that luxury cars had to be excluded. Though not designed to sell in low Numbers, luxury cars are priced at a point where low sales volumes can be tolerated.

Can the same be said of sports cars which compete with luxury cars? Perhaps. But a line had to be drawn somewhere, and that line is in the middle of a very grey area. Thus, the Chevrolet Corvette is a luxury car from a mainstream brand; not eligible for the Worst Sellers list. But the Mazda RX-8? Well, the RX-8 isn’t that expensive, and it is sold in mainstream Mazda dealers alongside the Mazda 3, Mazda 5, Mazda 6, and Mazda CX-7. Eligible it will be.
What about the Mazda MX-5 Miata? Miatas are low volume roadsters – they don’t need to be exploited for the purpose of motor mockery, do they? Numerous sporty machines sell better: the Nissan 370Z, Ford Mustang, Chevrolet Camaro, and Volkswagen GTI as examples. Vehicles ignored for the purposes of the Graph you’ll see below included officially discontinued models and cars from dead brands. Yes, the Pontiac Solstice was not the most successful in March. That should be obvious without showcasing its lackluster (7) sales from last month. 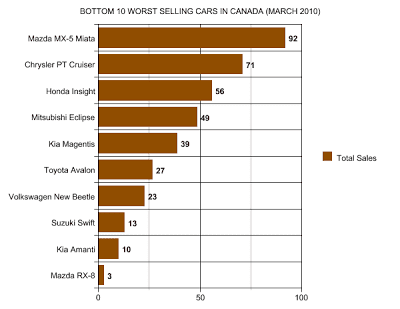