What do huge midsize sedan sales say about the cars on American roads in 2010? Despite the fact that the vast majority of midsize sedans leave the showroom fitted with 4-cylinder engines, or that some midsize sedans aren’t even available with V6 engines, hundreds or thousands of sedate family cars are sold to Americans every month with wickedly powerful powerplants. Honda’s Accord V6 has an output of 271 horsepower. The bland masterpiece that is the Toyota Camry is sometimes sold with a V6 producing 268 horsepower.

Want more? The slow-selling Mazda 6 can be had with 272 horsepower. And though not generated by a V6 engine, the upcoming Hyundai Sonata 2.0T will have the headline-grabbing figure of 274 horsepower. It’s true, most of the cars you see int he Graph below aren’t very sporty, not even the ones with V6 engines. But the next time you look at the dude beside you in his brand new beige 4-door and assume he’s not packing heat, ya better be careful. There very well may be Porsche-baiting bhp under that dowdy hood of his. 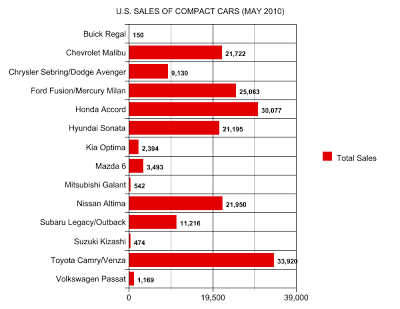