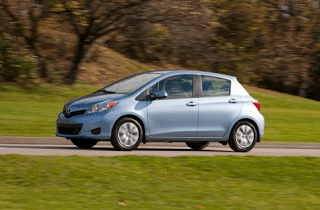 Oh, volume isn’t all about appeal and desirability. The Audi A3 isn’t selling well now because there isn’t really an Audi A3 to be had. Cars.com lists twelve in their inventory database… in all of America. Seven are diesel-powered. The new A3 sedan will likely sell better than the A3 hatchback ever did.

But Americans don’t really seem to appreciate the Toyota Yaris. During a month in which Ford Fiesta sales more than doubled to 9363 units, Chevrolet Sonic sales rose 5% to 7122, Honda Fit sales improved 10% to 5055, Hyundai and Kia combined for 9406 Accent/Rio sales, Nissan sold 8705 Versas, and Toyota itself sold 3442 Prius C hatchbacks, Toyota Yaris sales fell 63% to only 747 units. (Mazda sold 742 2s, a 21% decline.) This isn’t a new thing for the Toyota Yaris – sales are down 40% this year. Yaris volume has declined in ten consecutive months.

There’s something to be said for the fact that certain cars aren’t supposed to sell in large volumes. So when GoodCarBadCar ranks worst sellers, they’re assembled in three different ways. One of those ways is to measure how much less often a car sells than it did at this time last year. Vehicles are also ranked by volume, but two different times. One list shows vehicles which have base prices under $45,000. By excluding more costly vehicles, we exclude many of the vehicles which aren’t intended to sell frequently. But for transparency and fullness, we also make that list available, too.

Source: Manufacturers &
Vehicle must have been on sale in June 2013, must not have been officially cancelled by its manufacturer, and must have been showcased on manufacturer’s website through June 2013. Chevrolet’s Caprice PPV, Lexus LFA, Honda FCX are not eligible for this list. Sales by brands like Ferrari, Lamborghini, Lotus, Maserati, Rolls-Royce, and Bentley go unreported, unfortunately.
* In the near-term, for the purposes of the worst sellers list, GCBC will be viewing the Acura RL and RLX as one car. Indeed, Acura’s done the same with their sales release, so we’re left not knowing how many RLs were left to be sold.