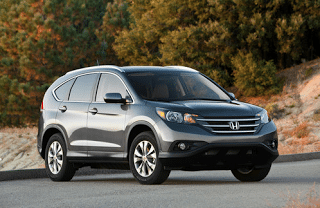 Ten of America’s 20 best-selling SUVs and crossovers wear Detroit badges, and three of the top five. But the Ford Escape, after leading the Honda CR-V through seven months, has been outsold by the CR-V by more than 7000 sales in the three months since.

Among premium brand utility vehicles, the Lexus RX is 35,379 sales ahead of the next-best-selling Cadillac SRX. The Lexus ranks 16th; the Cadillac is America’s 27th-best-selling SUV or crossover.

5.3% of the SUVs and crossovers sold in America are full-size products from General Motors, Ford, Nissan, and Toyota. At 11.7%, full-size SUV growth seems strong – the overall new vehicle market isn’t growing that fast, after all. But overall SUV/CUV sales are up 12.3% in 2013. Those same seven large SUVs accounted for 5.4% of the SUV market one year ago.

Meanwhile, the four best-selling utility vehicles in the United States – the smaller CR-V, Escape, Equinox, and RAV4 – make up 22.6% of the SUV/CUV market, up from 22.5% during the first ten months of 2012.

Premium automakers produce 15.3% of all SUV/CUV sales, up from 15.2% at this stage of 2012. Sales of SUVs and crossovers at Acura, Audi, BMW, Cadillac, Infiniti, Land Rover, Lexus, Lincoln, Mercedes-Benz, Porsche, and Volvo are up 12.5% through the first ten months of 2013.

New to the list this month: the 2014 Jeep Cherokee, which collected its first 579 sales in late October and currently sits in the 85th spot. (Mazda is also attributing a second sale to the defunct Tribute’s YTD total, although we don’t know in which month the sale occurred.)

There are substantial improvements in this month’s ranking of vehicle sales. Prior year figures now include the actual numbers from last year, not just the percentage increase from last year. As a result, we’ve also included vehicles like the Dodge Nitro and Suzuki XL7, nameplates which collected sales in 2012 but were extinct before 2013 began. At any time, click the Rank column to return to the original format. If you’re on a mobile device, you may need to choose the full version of the site (at the bottom of the page) in order to use the sortable function.

Reminder: these are year-to-date rankings, but you can sort utility vehicles by October volume by clicking the October 2013 column header, or you can rank SUVs and crossovers by improvements or declines using the % columns. Or, most importantly, you can list automakers together by selecting the SUV/Crossover column header. Just remember, the list is horizontally flipped from the norm: YTD on the left, monthly data on the right.