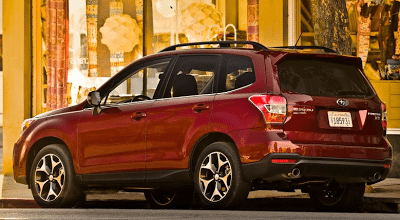 U.S. sales of the Ford Escape, Subaru Forester, Mazda CX-5, Mitsubishi Outlander Sport, and Nissan Xterra all rose more than 50% in April 2013. At the other end of the scale, the Toyota FJ Cruiser, Mitsubishi Outlander, Nissan Juke, Kia Sportage, Kia Sorento, and Hyundai Tucson all declined on a year-over-year basis even as America’s overall new vehicle market grew 8.5%.

Although it maintained its year-to-date lead over the Honda CR-V, the Ford Escape’s 52% improvement wasn’t enough to keep the monthly best-selling SUV (and best-selling small SUV) crown in April.

Utility vehicles accounted for 27% of Ford brand sales in April, slightly less than the 29% owned by the Ford F-Series. Of those 56,216 SUV and crossover sales at Ford, the Escape was responsible for 46%. At Honda, the CR-V accounts for 22% of brand-wide sales so far this year, down from 25% in the first four months of 2012.

There’s one additional table in this month’s small SUV breakdown. Above the three more specific categories – small, smallest, and offroaders – all 29 vehicles which could be reasonably be considered small SUVs or crossovers are gathered in one place. This enables you to compare, for instance, the Buick Encore with the Jeep Wrangler, two small utilities which try to steal a slice of the pie with very different methods.

You can click any model name in the tables below to find historical monthly and yearly U.S. sales data. You can also select a make and model at GCBC’s Sales Stats page. These tables are now sortable, so you can rank U.S. small SUVs any which way you like. Suggestions on how GCBC should break down segments can be passed on through the Contact page.