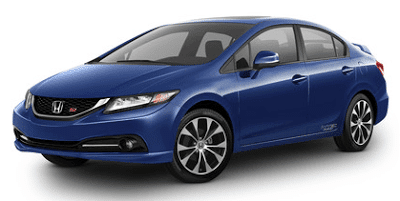 The Honda Civic took control of the small car market in October 2013 and, as a result, has now all but secured its lead among small cars in the United States on year-to-date terms, as well.

The Civic, available as both a sedan and as a coupe, outsold the Toyota Corolla (and the Matrix with which Toyota combines Corolla sales figures) by 3691 units and leads the Toyota tandem by 23,705 units through ten months.

It’s been a decent year for compact car sales in the United States. Their sales aren’t growing as fast as the overall industry, however, and October sales weren’t noteworthy at all. Eight different compacts reported substantial losses, and that doesn’t include the disappearance of 1072 Suzuki SX4 sales.

The subcompact segment wasn’t booming in October, either, as ten nameplates combined for a 1.3% year-over-year increase. The segment was boosted by the Chevrolet Sonic’s 25% increase, the best-selling Nissan Versa’s 315-unit gain, and 475 Mitsubishi Mirage sales. But Toyota Yaris volume plunged and the Mazda 2 suffered a 35% decline.

The Mirage is just as likely to have stolen 475 sales from the Chevrolet Spark as it was to have added 475 sales to the subcompact category’s total. With Scion iQ sales tumbling and the Smart Fortwo declining sharply in October, the smallest small cars were down 21%. Sales of coupeesque small cars, meanwhile – 500, Cooper, Veloster, tC, Beetle – fell 18%.

You can click any model name in the tables below to find historical monthly and yearly U.S. auto sales data. You can also select a make and model at GCBC’s Sales Stats page. These tables are now sortable, so you can rank compacts, subcompacts, and city cars any which way you like. Suggestions on how GCBC should break down segments can be passed on through the Contact page. The + icon has been removed from year-over-year improvements. Look instead for red font to designate year-over-year declines. We’ve also added prior year data so you won’t have to hunt around for historical figures.

* indicates a vehicle which is also shown in another GCBC segment breakdown.
GCBC isn’t here to break down segments, an impossible task for any group, but to display sales data for the sake of comparison. The more ways sales data can be displayed, the better, right? This explains why you’ll see the Encore and XV Crosstrek are listed with small SUVs, too, and the Acura ILX shown with mainstream cars is also displayed with luxury cars… because readers have wanted it both ways. You can always find the sales results for EVERY vehicle and form your own competitive sets by using the All Vehicle Rankings posts.