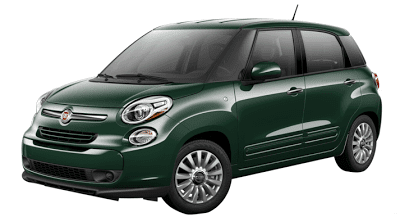 Through the first half of 2013, the Toyota Corolla is the best-selling small car in America, although its lead over the Honda Civic is small. That the Corolla achieved its 158,972-unit total with help from the Matrix is meaningful, but only as consequential as the fact that Honda also sold the Civic with two bodystyles: sedan and coupe.

America’s favourite subcompact car in June 2013 was the Ford Fiesta, which outsold the Nissan Versa by 658 units. Year-to-date, the Versa is 18,856 sales ahead of the second-best-selling Chevrolet Sonic. Hyundai and Kia have sold 53,119 copies of their Accent/Rio fraternal twins in the last six months.

After 15 consecutive months of year-over-year growth, sales of the Fiat 500 dropped in June 2013. Brand-wide sales rose, albeit slightly, as Fiat introduced the dreadfully ill-proportioned 500L. At its six-month pace, Fiat will sell just under 45,000 copies of the 500 and quite clearly, an unknown number of 500Ls.

You can click any model name in the tables below to find historical monthly and yearly U.S. sales data. You can also select a make and model at GCBC’s Sales Stats page. These tables are now sortable, so you can rank small cars any which way you like. Suggestions on how GCBC should break down segments can be passed on through the Contact page.

Source: Manufacturers & ANDC
* indicates a vehicle which is also shown in another GCBC segment breakdown.
^ Chevrolet has also sold two Aveos so far this year, down from 56 in the first half of 2012.
GCBC isn’t here to break down segments, an impossible task for any group, but to display sales data for the sake of comparison. The more ways sales data can be displayed, the better, right? This explains why you’ll see the Encore and XV Crosstrek are listed with small SUVs, too, and the Acura ILX shown with mainstream cars is also displayed with luxury cars… because readers have wanted it both ways. You can always find the sales results for EVERY vehicle and form your own competitive sets by using the All Vehicle Rankings posts.