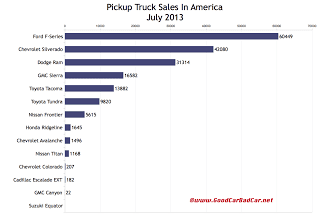 U.S. pickup truck sales rose 23% to 184,462 units in July 2013, a massive uptick in volume that was fuelled by, not surprisingly, the top-selling trucks. Sales of America’s five most popular pickup truck ranges grew at least 22%. In the case of GM’s twins, sales were nearly half again as strong as they were a year ago.

Combined, the Chevrolet Silverado and GMC Sierra trailed the Ford F-Series by 1787 units last month. The F-Series’ lead over the GM twins now stands at 39,054 units through seven months.

Non-full-size trucks accounted for 21,371 of the truck market’s 184K units, or 11.6%. Of those 21,371 sales, just under two-thirds belonged to the Toyota Tacoma, America’s fifth-best-selling truck overall. Ford’s F-Series owned 32.8% of the overall truck market and gathered up 37.4% of the conventional full-size market: F-Series, Silverado, Ram, Sierra, Tundra, Titan.

You can click any model name in the tables below to find historical monthly and yearly U.S. sales data. You can also select a make and model at GCBC’s Sales Stats page. This table is now sortable, so you can rank pickup trucks any which way you like. Best seller lists for cars and SUVs are upcoming.