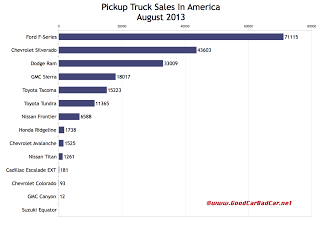 America’s best-selling truck sold more than 70,000 copies for the second time this year, a feat that seems impossible for any of its rivals to consider in this era of F-Series domination. With six (but mostly just two) truck nameplates, General Motors sold 63,431 trucks in total in August.

You can click any model name in the table below to find historical monthly and yearly U.S. sales data. You can also select a make and model at GCBC’s Sales Stats page. This table is now sortable, so you can rank pickup trucks any which way you like. August best seller lists for cars and SUVs are upcoming.