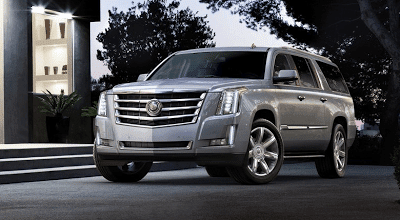 In October, Land Rover USA sold more than 1100 Range Rovers for the third time this year, a feat Land Rover accomplished just once in the previous two years.

With a base MSRP of $63,000, the Mercedes-Benz GL-Class certainly sells more often, but one would imagine that the Range Rover’s $83,545 base price limits sales to some degree.

Cadillac, meanwhile, has introduced the next Escalade – pictured above – but the Escalade that’s available in showrooms is still the outgoing model. Regular-wheelbase ‘Slade sales rose 8% to 1069 in October. Cadillac also sold 608 Escalade ESVs and 137 Escalade EXT. The EXT was America’s 11th-best-selling truck in October.

You can click any model name in the tables below to find historical monthly and yearly U.S. auto sales data. You can also select a make and model at GCBC’s Sales Stats page. This table is now sortable, so you can rank large luxury SUVs any which way you like. Suggestions on how GCBC should break down segments can be passed on through the Contact page. The + icon has been removed from year-over-year improvements. Look instead for red font to designate year-over-year declines. We’ve also added prior year data, so you’ll spend less time hunting around GCBC for historical figures.