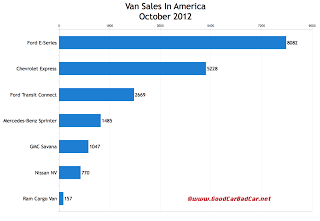 Fewer than four out of every 100 new commercial vans registered in America in October 2012 were Ram Cargo Vans. The weak-selling Nissan NV didn’t measure up to its own October 2011 performance, falling 18% year-over-year. Mercedes-Benz’s Sprinter owned 8.3% of the market.

That leaves the major players, Ford and General Motors. The Chevy Express and GMC Savana combined to grab just under one-third of the segment. That left Ford with 54.4% of all new commercial van segment. 25% of Ford’s total was Transit Connect-derived.
All 265 Vehicles Ranked By U.S. October YTD Sales

As will always be the case in the future, historic brand and corporate totals (monthly and yearly going back to 2002) are now available through the dropdown menu at GCBC’s Sales Stats page, along with results for more than 260 currently sold vehicles. Or you could just click the model name in the table below.