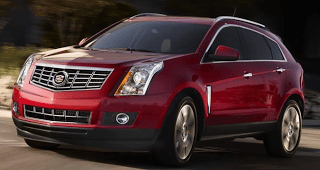 Too little too late? The Ford Escape had been surging, taking the title of America’s best-selling SUV in the third quarter of 2012. But the Honda CR-V had built up a big lead for itself earlier in the year and here we see that October was the CR-V’s month as well, though narrowly. The CR-V’s year-to-date lead grew by 373 units.

The Cadillac SRX posted its best sales month since December of last year and surged past GM’s more mainstream Chevrolet Traverse into 18th spot on this list of America’s 20 best-selling SUVs in October 2012. The SRX accounted for 41% of all Cadillac sales last month, and it’s a good thing sales jumped. CTS sales plunged in the presence of the new ATS, and the ATS didn’t sell well enough to make up for the CTS’s decline.

In the middle of the pack, Toyota’s Highlander squeaked out a victory over the Honda Pilot, just as the Camry and Corolla did over the Accord and Civic. Jeep’s sixth-ranked Wrangler far exceeded the market’s 7% overall growth and nearly caught up to Jeep’s higher-volume Grand Cherokee. With help from the Police Interceptor Utility, the Ford Explorer is now 8029 sales ahead of the Grand Cherokee. Ford has sold 4830 Explorer Police Interceptors since it went on sale in March.

GoodCarBadCar.net has already published the list of America’s five favourite trucks and 20 most popular cars. As always, historic brand and corporate totals (monthly and yearly going back to 2002) are now also available through the dropdown menu at GCBC’s Sales Stats page, along with results for more than 260 currently sold vehicles. That’s where you’ll find out that Cadillac’s best SRX sales year was last year, when 56,905 were sold.

Below, however, you’ll find detailed sales figures for all 20 of America’s best-selling SUVs and crossovers. The Subaru Outback? We ranked that as America’s 14th-best-selling car in October. C’mon, it’s a Legacy wagon.