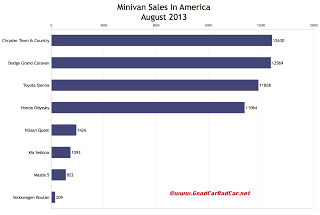 The Chrysler Town & Country was America’s best-selling minivan in August 2013.

The Chrysler one of only three minivan nameplates to report a year-over-year increase. The minivan market as a whole slid 6% as sales of the Dodge Grand Caravan, Honda Odyssey, and lesser players from Kia and Mazda tumbled. And as the Volkswagen Routan nearly disappeared, as it soon will.

Together, the trio of Ontario-built minivans owned 49.2% of the minivan market. Chrysler and Dodge held 48.8% on their own,