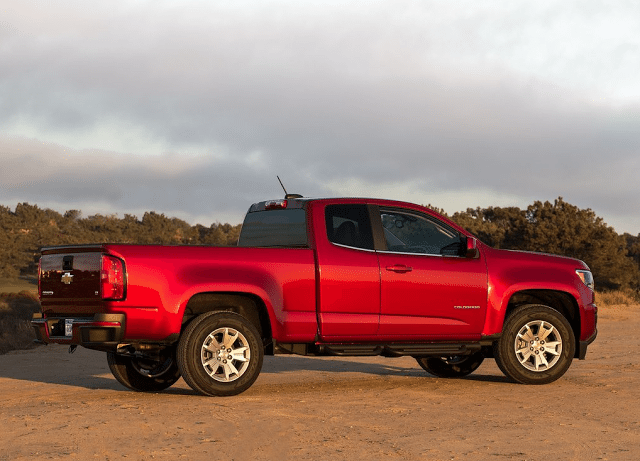 In April, the overall U.S. auto industry grew by approximately 64,000 sales. Overall pickup truck sales increased by 15,000 units. In other words, much of the growth in the pickup truck market last month was generated by the smaller quintet.

Year-to-date, the Toyota Tacoma-led small/midsize category has grown by more than 38,000 sales, slightly more than the 36,000 sales added by full-size pickup trucks.

While their bigger brethren are growing faster than the rate of the overall industry, it’s the arrival of new GM midsize twins and continued growth from the two key established midsize players that are causing the overall pickup truck market to appear so especially healthy.

Yes, even as Chevrolet and GMC added 35,696 sales to the midsize category through the first four months of 2015 – equal to 31% market share – the Toyota Tacoma hasn’t suffered, nor has the Nissan Frontier.

Year-to-date, the Tacoma’s market share has plummeted from 63% to 48%. But if there was ever a situation in which market share tallies matter not, surely this is it. Toyota Tacoma sales jumped 13% through the first one-third of 2015 and in April more specifically. The Tacoma is on track for its best year since 2007, perhaps even 2006.

Nissan Frontier sales are also rising. In fact, the Frontier’s rate of growth matches the rate of expansion in the full-size truck category. April sales of the Frontier increased only marginally, however, and the 5827-unit total was the lowest for the Frontier since July of last year. Nevertheless, the pace of improvement through the first one-third of 2015 suggests Nissan will easily exceed last year’s U.S. sales total, which was the best since 2006.

As for the GM twins, April was the best month yet for the new Chevrolet Colorado. At 7010 units, April was about 10% better than the first-quarter average for the Colorado. GMC Canyon sales have hovered between 2400-2500 per month over the last three months. Combined, the twins continue to trail the Toyota Tacoma by a wide margin and will continue to do so until one of two factors takes effect: either Tacoma sales will drop as the automaker prepares to launch a significantly revised 2016 model or GM will decide there’s enough demand to support increased production.

This article also appears on The Truth About Cars.