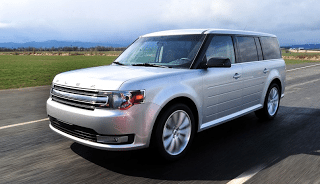 Japanese automakers own 22% of the midsize category, as it’s defined in the first table below. Detroit manufacturers still attract the majority of buyers who are looking for bigger mainstream brand SUVs and crossovers.

Indeed, among the biggest SUVs, GM owns nearly three quarters of the market.

You can click any model name in the tables below to find historical monthly and yearly U.S. auto sales data. You can also select a make and model at GCBC’s Sales Stats page. These tables are now sortable, so you can rank midsize SUVs and crossovers any which way you like. Suggestions on how GCBC should break down segments can be passed on through the Contact page. The + icon has been removed from year-over-year improvements. Look instead for red font to designate year-over-year declines. We’ve also added prior year data, which means you’ll spend less time hunting around GCBC looking for relatively recent historical data.