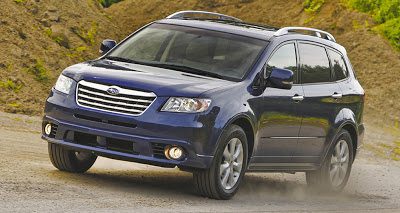 America’s best-selling midsize SUV, the Ford Explorer, set a sales record for its fifth-gen iteration in March 2013. The Explorer, with 1090 Police Interceptor sales assisting, outsold the Jeep Grand Cherokee by 5970 units in March.

The Dodge Nitro, Hyundai Veracruz, Jeep Liberty, and Mitsubishi Endeavor have nearly left us. Subaru’s Tribeca appears to have nearly died, as well, but that’s just normal. Over the last 15 months, Subaru USA has averaged 172 Tribeca sales per month.

GoodCarBadCar ranks midsize SUVs and crossovers in the first table below. Jeep’s Wrangler, along with the Nissan Xterra and Toyota FJ Cruiser, are broken out separately. The same can be said for three are-they-cars-or-crossovers: the Subaru Outback, Honda Crosstour, and Toyota Venza.

For the purposes of best seller lists, GCBC considers the trio to be cars. But we display them with both midsize cars and midsize SUVs in segment breakdowns. The Outback accounts for three out of every ten Subaru sales and it sells twice as often as the Venza and Crosstour combined. And 56 times more often than the Tribeca.

You can click any model name in the tables below to find historical monthly and yearly U.S. (and Canadian) sales data. You can also select a make and model at GCBC’s Sales Stats page. The tables are now sortable, so you can rank U.S. SUVs any which way you like. Suggestions on how GCBC should break down segments can be passed on through the Contact page.