Toyota USA sold 6299 more Camrys in April 2014 than in April 2013 and became America’s best-selling midsize car and best-selling car overall for the third time this year. Camry volume is basically level with what Toyota achieved during the first four months of 2013, when Camry volume hit a five-year high. 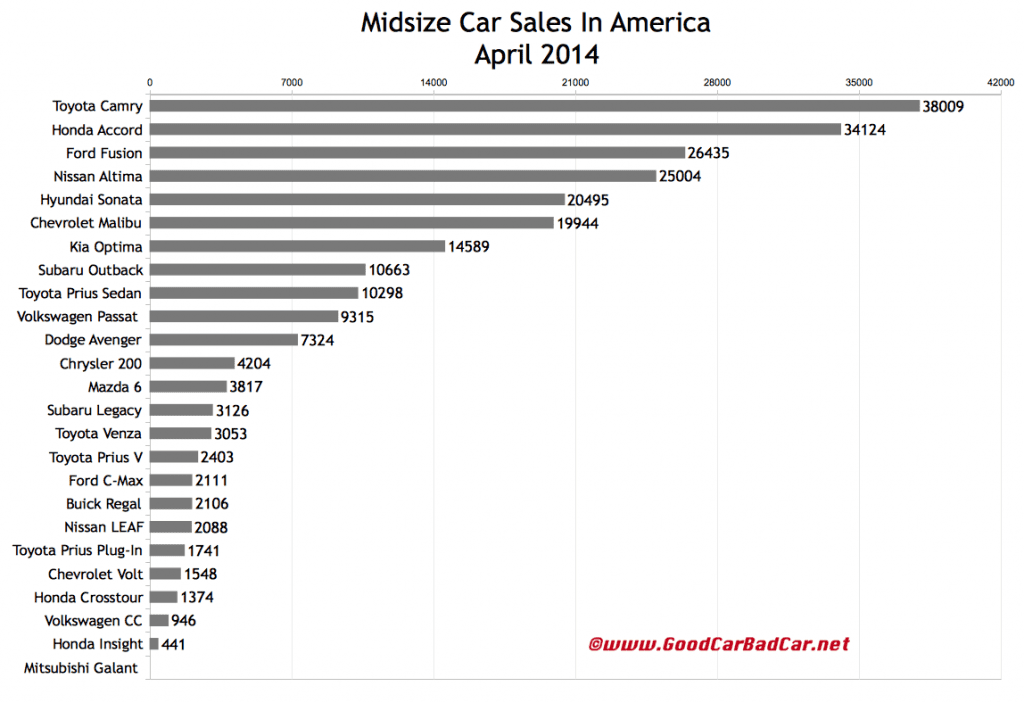 Hyundai and Kia combined to sell 35,084 Sonatas and Optimas in April, a 14% increase compared with April 2013. Hyundai will attempt to clear out its remaining sixth-generation Sonatas at just the right rate so dealers can begin selling new 2015s (pictured above) when that car arrives in the summer.

Optima sales reached record highs in 2013; Sonata volume fell to a three year low. Both cars are behind last year’s pace through the first four months of 2014.

Midsize declines are certainly the rule, rather than the exception, in the current passenger car climate. Car sales have fallen 2% in the United States this year. Conventional midsize cars are down more than 5%. April 2014 was slightly better than April 2013 despite the big (and not unexpected) declines at Chrysler and Dodge. The Avenger is dying off, the 200’s replacement will arrive shortly.

FCA revealed plans today to greatly expand the Chrysler brand’s product range over the next few years with a car to slot below the 200, a concentration on the Town & Country rather than the Dodge Grand Caravan, and crossovers to take the place of the long-departed Pacifica and Aspen. In the near future, all eyes will be on the 2015 200, however, as FCA hopes the traffic that would have headed the Avenger’s way doesn’t completely diverge. 8% of the midsize cars sold in America this year have been 200s and Avengers, down from 11% at this time last year.

Crosstown rival Ford, with its Fusion, has seen its share of the category rise just above 13% despite decreased volume. 46% of midsize buyers opt for one of the top three contenders: Camry, Altima, or Accord.