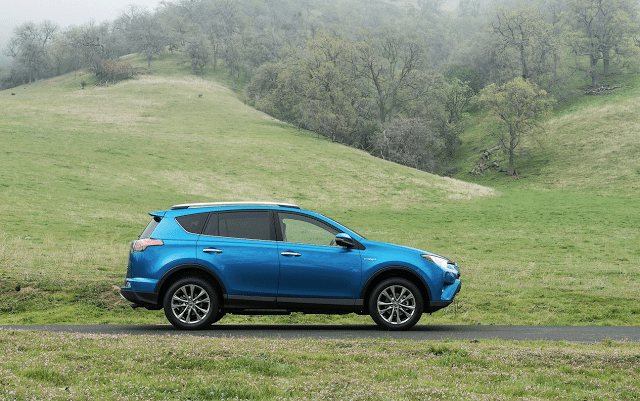 SUVs and crossovers accounted for mroe than 37% of America’s new vehicle market in the first-quarter of 2016, only a few points shy of the declining passenger car sector. Four out of every ten SUV/crossover sales originate with one of the ten most popular models in America: RAV4, Escape, CR-V, Rogue, Explorer, Equinox, Cherokee, Grand Cherokee, Wrangler, Highlander.

Not since October has any utility vehicle other than the Toyota RAV4 claimed top spot in the category. During that five-month span, Toyota sold 135,356 RAV4s in the United States, a 22% increase from the equivalent five-month period one year earlier. RAV4 volume has increased in each of the last seven months.

As Toyota’s cars struggle, a story we covered earlier this morning, Toyota’s SUVs and crossovers are surging, nearly masking the losses incurred by the Camry, Corolla, Yaris, Avalon, and Prius.

Along with the RAV4’s 14% first-quarter increase, Highlander sales are up 9% in advance of the refreshed model’s arrival. The Toyota 4Runner is now America’s 18th-best-selling SUV thanks to a 16% year-over-year increase. Even Sequoia and Land Cruiser sales are rising. And at Toyota’s upmarket Lexus division, the brand’s four utility vehicles collectively reported an 11% increase in U.S. volume in 2016’s first-quarter.

Source: Automakers & ANDC
* Italicized, asterisked, unranked lines are nothing more than available breakdowns, already included in the model’s total, not in addition to the model’s total.
° Overall figure is the total of SUV/crossover sales from all brands which report model-specific sales figures.
Tesla, unfortunately, doesn’t release model-specific monthly U.S. sales data, but we source estimates from HybridCars.com.
Model X estimate: 1800 in March; 2700 YTD.